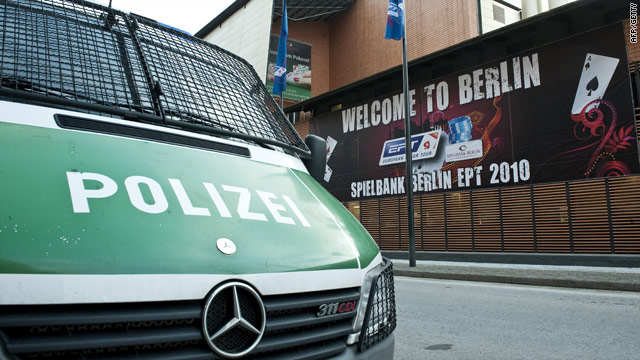 A police vehicle parked in front of the Grand Hyatt Hotel, Berlin, scene of the raid on an international poker tournament.
STORY HIGHLIGHTS
RELATED TOPICS

The Berlin police said the men, who had pistols and a machete, broke into the tournament at the Grand Hyatt Hotel, where the tournament is held, and forced organizers to hand over money.

A security staff member was lightly wounded after trying to hold down one of the men, police said in a statement.

The tournament participants were startled by the attack, and some tried to flee quickly, the police said.

The European Poker Tour, which organized the tournament, confirmed the robbery in a video statement on its Web site.

"An armed robbery took place today," it said. "Nobody was seriously injured. Most events restarted within a few hours; the $1,000 side event was canceled," it said.

The robbers lost a bag containing a large portion of their stolen money and then fled, police said. It was not immediately clear how much money the men carried out.

The European Poker Tour said the winner of the Berlin tournament garnered a €1 million ($1.3 million) prize.

Seven people were injured as participants tried to flee the area, police said. No further details were available.

Authorities asked the public for any information they might have on the perpetrators.

The competition began Tuesday and ends Sunday, the tour said. About 20 players remained in competition on Saturday, down from a field of nearly 400 players, according to the tour's Web site.