'Monster of Grbavica' held in Spain for Bosnian war crimes 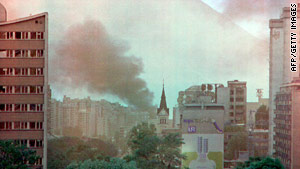 Veselin Vlahovic known as "the monster of Grbavica," after area of Sarajevo where he allegedly committed crimes.
STORY HIGHLIGHTS
RELATED TOPICS

Madrid, Spain (CNN) -- Spanish police have arrested a man wanted for war crimes during the Bosnian conflict from 1992 to 1995, the Interior Ministry said in a statement Tuesday.

The suspect, Veselin Vlahovic, born in Montenegro in 1969, was sought on three international arrest warrants for more than a hundred murders of women and children, as well as rape and torture, the statement said.

Vlahovic was known as "the monster of Grbavica" -- the name of the neighborhood of Sarajevo where he allegedly committed the crimes.

He was arrested by Spanish police investigating a criminal gang from Eastern Europe that committed armed robbery in Spain, the statement said.

Police closed in on the gang Monday afternoon in the town of Altea, in eastern Alicante province. Vlahovic tried to flee when police arrived and fought officers as they detained him nearby, the statement said.

The suspect, also known by the name of Batko, was carrying a forged Bulgarian identity document, and Interpol, the international police force, listed four aliases he used, the statement said.

The Web site, "Balkan Investigative Reporting Network," includes comments from Vlahovic's alleged victims or their survivors, including one who wrote in May 2009, "He killed my whole family. Some day he will pay for this."

After the Bosnian war, he was arrested for crimes that included armed robbery and a shooting in Montenegro. He was imprisoned in Podgorica, but escaped in June 2001, which led to one of the international arrest warrants, the statement said.

Soon after escaping from prison, Vlahovic shot dead a man in a bar in Serbia, and was sentenced to 15 years in prison. This led to another international arrest warrant, in addition to the one for war crimes.

In Spain, there were two warrants for his arrest -- one from an altercation at a brothel in 2004 and armed robbery in 2005. Soon after, he fired upon a police patrol car and fled into the countryside, the statement added.