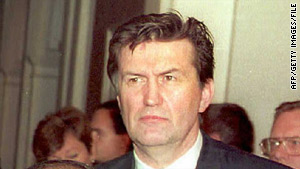 Ejup Ganic, pictured in 1993, was regarded by many as a relatively moderate Bosnian leader.
STORY HIGHLIGHTS

London, England (CNN) -- The former vice president of Bosnia was arrested Monday in London on a request from Serbia, where he is wanted for conspiracy to murder and breach of the Geneva Convention.

Metropolitan police arrested Ejup Ganic at Heathrow Airport on Monday afternoon, and he appeared at the City of Westminster Magistrates' Court, the United Kingdom Foreign Office said in a news release.

The British authorities were awaiting the full extradition paperwork before a court date for an extradition hearing can be set, the Foreign Office said.

Ganic was the vice president of Bosnia during the bloody civil war there between 1992 and 1995, and he was twice president of the Bosnian-Croat Federation in the years after the Dayton peace agreement in 1995. Ganic was regarded by many independent commentators at the time as a relative moderate in the war-time Bosnian leadership.

An engineer by profession, Ganic studied at the Massachusetts Institute of Technology in the United States. He would regularly brief journalists during the three-year civil war from his often-shelled office in the Bosnian presidency building in the heart of Sarajevo.

On Sunday, Bosnia and Serbia signed an agreement on extraditions for war crimes committed during the war that would let Bosnians be tried in Bosnia and Serbs in Serbia.

Ganic was in Britain attending a graduation ceremony at the University of Buckingham, which partners with a university in Sarajevo in which Ganic is reported to have a significant financial interest.