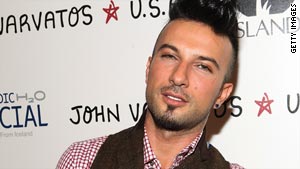 Tarkan has been Turkey's biggest pop star for more than a decade.
STORY HIGHLIGHTS

Police, Tarkan's publicist and relatives could not be reached for comment on the reported arrest.

According to Anatolian, Tarkan was detained along with several other individuals who are "important figures from the art and magazine world."

Tarkan rose to international prominence in the late 1990s for singing playful hit songs like "Simarik" (Spoiled). The heartthrob has been described by some as a Turkish Ricky Martin, referring to the Latin pop singer from Puerto Rico who achieved popularity worldwide.

German-born Tarkan, who uses only one name, also has made the pop charts around the world.

In recent years, it was reported, he has been living in New York City. The arrest was carried out in Istanbul.

Turkey is a key stop on a drug smuggling transit route between Asia and Europe. According to the United Nations Office on Drugs and Crime, it is a major hub for the trafficking of illegal heroin and opium from Afghanistan en route to European markets.

Drug operations involving Turkish celebrities, including artists and models, are often carried out in Istanbul.

Last month, Tarkan gave a concert in Istanbul's central Taksim square to celebrate the city's inauguration as Europe's 2010 Capital of Culture. Thousands watched as the artist performed along with a fireworks display.