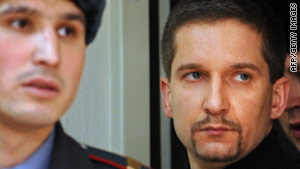 Yevsyukov, right, attempted to murder 22 people, according to the court.
STORY HIGHLIGHTS

Moscow, Russia (CNN) -- In a high-profile court case, a Moscow police officer was sentenced to life in prison Friday for killing two people and injuring seven in a drunken shooting rampage at a supermarket last year.

The verdict comes at a time when the Russian government has launched a crackdown on out-of-control police departments throughout Russia.

The dramatic nature of the supermarket shootings opened the floodgates for a mounting flurry of media reports accusing police of beatings, torture, rapes, drug trafficking, extortion, racketeering, taking bribes and other criminal activities -- as well as attacking the country's legal system for shielding law enforcement officials, or giving them mild punishment for their crimes.

Investigators and witnesses said Major Denis Yevsyukov, chief of a police precinct in southern Moscow, had been celebrating his 32nd birthday at a restaurant with friends and colleagues last April.

After a spat with his wife, he left the restaurant and went to the supermarket, where he wandered the store -- in uniform and carrying a handgun -- shooting random people.

According to investigators, after he was subdued by his fellow policemen Yevsyukov had no regrets about what he did, and said that if he'd had a Kalashnikov machine gun instead of a pistol, he would have used it.

In all, he attempted the murder of 22 people, according to the court.

A series of psychiatric examinations established he was sane when conducting his crime, the court said.

"Victims testified that Yevsyukov not only wanted to kill, he wanted to demonstrate his power and humiliate people," state prosecutor Amalia Kostoyeva said during the trial.

The rampage, captured on the store's surveillance cameras, generated a public outcry in Russia and forced President Dmitry Medvedev to fire the head of Moscow police and to speak about the need for reforming the country's Interior Ministry.

Along with the flood of press reports ripping police, last November a police officer from southern Russia, Major Alexei Dymovskiy, accused his superiors of corruption in a video posted on YouTube, making him a media star overnight. His posting triggered a series of similar revelations from acting and former police officers across the country.

The Interior Ministry's official statistics say more than 2,700 criminal cases were opened against policemen in 2009, which independent analysts and human rights activists say is a strong underestimation.

"It's impossible to modernize or reform the Interior Ministry, it can only be liquidated," said Andrei Makarov, a prominent lawmaker from Russia's ruling United Russia party, at a recent news conference called in response to another report of a crime committed by police. "There is a feeling that the Interior Ministry is waging a war against its own people."

A fresh opinion poll conducted across the country by the Levada Center, an independent polling and sociological organization, suggests that -- in stark contrast with Western democracies -- only 30 percent of Russians trust their police force, while 67 percent fear it.

And in the city of Moscow, a mere 1 per cent of respondents said they "rather trusted than distrusted" the police.

"Our respondents said their fear of lawlessness from policemen is only slightly less than their fear of attacks from terrorists, hoodlums and criminals," Polina Cherepova, a Levada Center sociologist, told CNN.

"The public feels estranged from the government institutions, including the police, which are supposed to protect their rights. But Russians feel that since they have no control over the police, they can't trust it", she said.

On Thursday, speaking at a long-awaited meeting of the Russian Interior Ministry's board, President Dmitry Medvedev announced sweeping plans to increase police accountability, and to introduce anti-corruption measures and new procedures for selecting officers.

He emphasized that policemen can't be above the law and should face harsh prosecution if they break it.

"I suggest that if a crime is committed by an Interior Ministry officer, this should be viewed as an aggravating circumstance," Medvedev said in his speech broadcast by Russian TV.

"A number of recent events at the Interior Ministry caused a very serious public reaction. Honestly, they had an impact on the authority of the ministry and its personnel," he said.

Major cuts and reshuffles will be carried out in the near future, he said, adding, "This is just the beginning. Further decisions are pending."

Just hours later, Medvedev fired 18 top police officials, according to the Kremlin. On his Web site, Medvedev also published several draft laws intended to fix the Russian police problems. He said he wants the proposals turned into law until the end of this year.