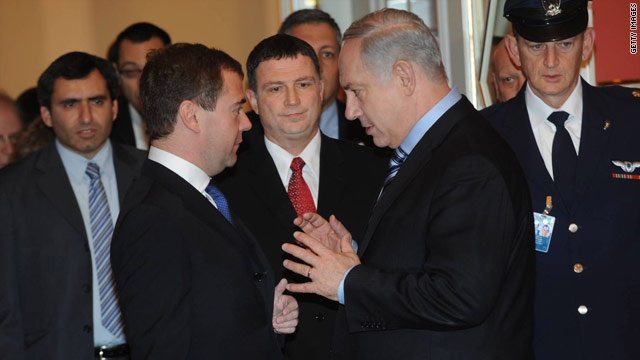 "Israel believes that strong pressure must be applied to Iran, especially very sharp sanctions, which United States Secretary of State (Hillary) Clinton referred to as 'crippling sanctions,'" Netanyahu said, according to a statement from his office announcing the trip.

While specific details about the meetings were not released, a source in the Kremlin told Itar-Tass, a major Russian news agency, that Iran's nuclear program was discussed.

Russia shares some common trade and energy interests with Iran, and in the past has used its veto vote at the U.N. Security Council to often shield Iran from strict sanctions. However, in recent weeks, the Kremlin has indicated that tougher sanctions may be a realistic response to Tehran moving forward with its nuclear enrichment program.

Iran already faces U.N. sanctions. The five permanent members of the U.N. Security Council -- the United States, Britain, Russia, China, and France, all of which have veto power -- have been in discussions about possible further sanctions. Russia and the other countries has urged the Islamic republic to accept a proposal under which Iran would ship its uranium abroad to be enriched and then returned, but Iran has rejected that offer.

Medvedev welcomed Netanyahu on Monday, saying, "Israel for us is not some ordinary partner, but the country with which we are connected by many years of relations and a special composition of the population," according to his office.

Netanyahu, who is scheduled to return home Tuesday, warned less than a week ago that "Iran is racing forward to produce nuclear weapons in brazen defiance of the international community."

Israel has often been the object of rhetoric by Iranian President Mahmoud Ahmadinejad, who has said the Jewish state "must be wiped off the map" politically. The United States has had to assure Israel that its interests will be protected to keep its military on the sidelines.

Iran recently announced that it can now enrich uranium to the point where it can sustain a nuclear reaction, but denies it plans to build a bomb.

Ahmadinejad said the country is capable of enriching uranium up to 80 percent but won't.

Meanwhile, Clinton has been traveling through the Middle East, expressing concern over Iran's nuclear ambitions with Arab allies.

In Saudi Arabia on Monday, she called Iran's recent announcement that it will start to produce higher-grade enriched uranium "a provocative move in defiance of United Nations Security Council resolutions" and warned that the "increasingly disturbing and destabilizing actions" by Iran "will result in increasing isolation."

She added: "We see that the government of Iran, the supreme leader, the president, the parliament, is being supplanted, and that Iran is moving toward a military dictatorship. Now, that is our view."