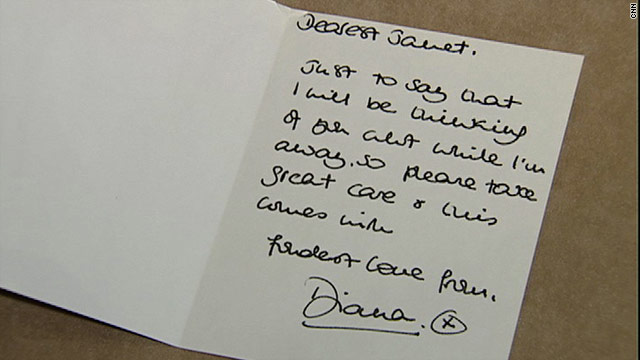 One of the notes from Princess Diana being sold at auction in London.
STORY HIGHLIGHTS
RELATED TOPICS

London, England (CNN) -- More than 30 letters and cards written by the late Princess Diana were up for auction Saturday in London, revealing personal details such as how she liked to open presents early and that she had trouble coping with media attention.

Most of the correspondence was to Diana's personal beautician, Janet Filderman, but the auction also includes notes to her chauffeur, Steve Davies, and Christmas cards with family portraits sent while she was still married to Prince Charles.

"Of course I opened your present!" Diana writes in a letter to Filderman on June 28, 1985 -- three days before the princess's birthday. "I have never been able to keep a parcel until the big day & I am not going to start at 24!!"

The letters date from 1984 to 1990, and show that the two women exchanged many gifts including flowers, picture frames and opera tickets. Diana frequently mentions in the letters that she liked opening gifts early.

"I rushed home to open your Christmas present, which I thought was quite good considering the 25th is actually two weeks away!!" Diana wrote December 14, 1985.

She refers to her son, Prince William, who was 3 at the time: "I could not resist opening my present, as a parcel of any shape or form has never been safe with me & I fear that William has also picked up this dreadful habit from his mother, as I find wrapping paper undone in the most extraordinary places!"

On her birthday in 1988, Diana thanks Filderman for the gift of a letter opener and says she actually waited to open it on time.

Estimates for the correspondence start at £200 ($314) and go up to £1,200-£1,500 for a letter Diana wrote in 1987 about her problems with public attention. The princess struggled with that until the day she died in a Paris car wreck 10 years later, after the paparazzi chased her car.

"I wish that I could cope with the media & peoples (sic) thirst for knowledge of us, but after six years I find everything that much more of a struggle & just cannot see a light at the end of the tunnel," Diana writes to Filderman after a trip to Spain.

"I know there are a million people worse off than me & that I should do all that I can for them, but at the end of the day I have to live with myself & emotionally at the moment I am upside down & confused (so boring for those around me) & putting on this act is desperate, but if it keeps people off my back then surely it must be worth it," she writes.

International Autograph Auctions, which was organizing the sale after being approached by Filderman, called it "a letter of extraordinary and revealing content."

In one letter to Filderman just before Christmas 1988, Diana thanks her for sending treats to the boys and says "the peanuts have been attacked."

On Christmas Day the year before, Diana thanks her beautician for sending a picture frame because she takes so many photos of her "small men," the two princes.

Included in the auction are thank-you letters written by young William and Harry, both on children's stationery and in a childhood script.

"Thank you for the James Bond video it is brilliant. Thank you. See you soon. With love from William," reads one letter, written on commercially printed "thank you" stationery that features a teddy bear writing with a quill at the top.

The letter was written to Davies, their chauffeur, likely after William's ninth birthday in 1990, the auction house said.

There is also a note from Harry to Davies from September 1990, when the prince turned 6. On stationery with a smiling elephant at the bottom and the words "Thank You" printed at the top, Harry writes, "I love the video and sweets. Love from Harry."