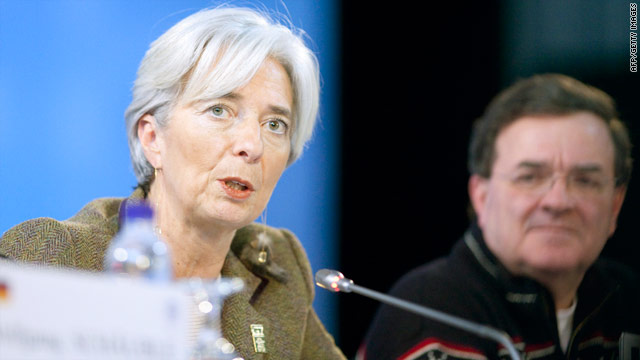 London, England (CNN) -- French finance minister Christine Lagarde said Wednesday the euro has made the 16 European countries that use it "stronger" and reinforced the level of trade among them.

Speaking to CNN's Jim Bitterman, Lagarde also said speculators are playing with the level of the euro at the moment in the hope they can cash in on the process.

"The currency is a common good, it's a public good," Lagarde told CNN. "It's critical. It has protected us, it has made us stronger, it has certainly reinforced the level of trade that we've conducted amongst ourselves. And it's a key component."

Asked if currency speculators were out to destroy the European currency, Lagarde replied: "There is a little game that is being played by speculation, yeah, and by speculators.

"Shorting a currency in the hope that you can cash in on the process is a pure speculative approach and this is one that is taken by several operators in the market at the moment."

"That is, no excess, no abuse of the system," she said.

She said France had put in some legislative "modifications" to help achieve those goals, including regulation on bankers' compensation and bonuses, a "revised supervision system" and "reviewed legislation concerning rating agencies."

"We need to pursue that," she said. "I'm personally convinced we need better regulation, properly enforced, with a regular reminder of what we need to respect."

Up to 1000 projects will benefit from the package, which was first proposed by French President Nicolas Sarkozy in December and approved by French lawmakers in January.

The package is expected to stimulate economic growth of around 1.3 percent, Fillon said. France has so far avoided the worst of the recession that has gripped many of its western European neighbors, including Germany and the UK.

Last year, the French government injected some $14 billion into the country's six largest banks to help stabilize the economy and ensure the banks had adequate lines of credit.