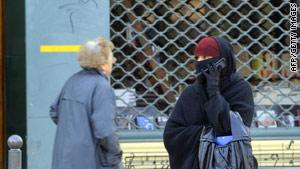 France is home to about 3.5 million Muslims -- or 6 percent of the population.
STORY HIGHLIGHTS

Paris, France (CNN) -- France has denied citizenship to a man because he allegedly forced his wife to wear a full Islamic veil, the French immigration minister said in a statement Wednesday.

The man was applying for citizenship in order to join his French wife in France, Immigration Minister Eric Besson said. The man was refused citizenship because he was depriving his wife of the liberty to come and go with her face uncovered, Besson said.

The decision, made Tuesday, came exactly a week after a French parliamentary commission recommended a partial ban on any veils that cover the face -- including the burqa, the full-body covering worn by some Muslim women.

The ban -- which has not yet come up for a vote -- would apply in public places like hospitals and schools, and on public transport, the commission announced.

Foreigners may become French citizens if they marry French nationals and meet certain criteria, including integrating well in French society and having "good morality," Besson said. It is on the criteria of morality that the man's citizenship request was denied, Besson said.

"This individual imposes the full veil upon his wife, does not allow her the freedom to go and come as she pleases, and bans her from going out with her face unveiled, and rejects the principles of secularism and equality between man and woman," Besson said he told President Nicolas Sarkozy.

France's top court denied a Moroccan woman's naturalization request in 2008 on the grounds that she wore a burqa.

Sarkozy controversially told lawmakers six months ago that the traditional Muslim burqa was "not welcome" in France. He said the issue is one of a woman's freedom and dignity, and did not have to do with religion.

France has relatively tight controls on religion, according to the Pew Forum on Religion & Public Life. It has among the most severe government restrictions on religion in Western Europe, as well as some of the highest levels of social tension involving religion, Pew senior researcher Brian Grim told CNN.

More than half of French people support a full ban veils, according to a recent opinion poll. The Ipsos poll for Le Point magazine found 57 percent of French people said it should be illegal to appear in public wearing clothes that cover the face.

That's despite government estimates that fewer than 2,000 women in the country actually wear the full Islamic veil.

France has about 3.5 million Muslims, representing about 6 percent of the population, according to Pew Forum research. The country does not collect its own statistics on religion in accordance with laws enshrining France's status as a secular state.

CNN's Jessica Hartogs in London, England, contributed to this report