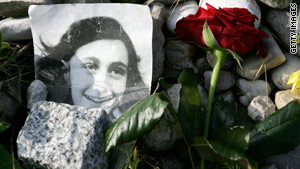 Anne Frank was among eight people hidden by Miep Gies and others during WWII.
STORY HIGHLIGHTS
RELATED TOPICS

(CNN) -- Miep Gies, who ensured the diary of Anne Frank did not fall into the hands of Nazis after the teen's arrest, has died. She was 100.

Gies was among a team of Dutch citizens who hid the Frank family of four and four others in a secret annex in Amsterdam, Netherlands, during World War II, according to her official Web site, which announced her death Monday. She worked as a secretary for Anne Frank's father, Otto, in the front side of the same Prinsengracht building.

The family stayed in the secret room from July 1942 until August 4, 1944, when they were arrested by Gestapo and Dutch police after being betrayed by an informant. Two of Gies' team were arrested that day, but she and her friend, Bep Voskuijl, were left behind -- and found 14-year-old Anne's papers.

"Then we went downstairs. And there we stood, Bep and I. I asked, 'What now, Bep?' She answered, 'You're the oldest. You hold on to them. So I did."

The girl had chronicled two years of the emotions and fears that gripped her during hiding, as well as candid thoughts on her family, her feelings for friend-in-hiding Peter van Pels, and dreams of being a professional writer. Mixed into the entries were the names of the Dutch helpers, who risked their lives to keep the family's secret.

"I didn't read Anne's diary papers. ... It's a good thing I didn't because if I had read them I would have had to burn them," she said in the 1998 interview. "Some of the information in them was dangerous."

The diary was sheltered in Gies' desk drawer and later turned over to Otto Frank when he returned after the war as the only surviving resident of the annex. Anne died at northern Germany's Bergen-Belsen concentration camp in 1945.

Her father published her diary, titled "The Secret Annex," in 1947.

Despite the legendary hardship she endured during the German occupation, Gies never embraced the label of a hero.

"More than 20,000 Dutch people helped to hide Jews and others in need of hiding during those years. I willingly did what I could to help. My husband did as well. It was not enough," she says in the prologue of her memoirs, "Anne Frank Remembered: The Story of the Woman Who Helped to Hide the Frank Family."

"There is nothing special about me. I have never wanted special attention. I was only willing to do what was asked of me and what seemed necessary at the time."