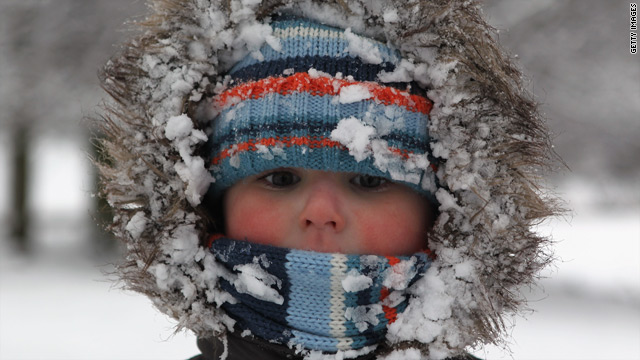 Many parts of northern Europe are battling with a blast of Arctic air that is sending temperatures plummeting.
STORY HIGHLIGHTS

London, England (CNN) -- Severe winter weather continued to cause transport chaos across much of the UK Thursday, while days of heavy snow and plummeting temperatures plunged Europe into a deep freeze.

More than 100 flights have been canceled at London's Gatwick airport and British Airways warned of lengthy delays at both Gatwick and Heathrow.

A Eurostar train from Brussels to London was delayed in the Channel Tunnel, but a spokesman could not confirm if it was because of the weather.

Last month, thousands of Eurostar passengers were left stranded on either side of the English Channel after services were suspended following a series of train breakdowns.

Meanwhile, motorists across Britain were also dealing with lengthy delays, closed motorways and hundreds of accidents because of heavy snow and icy conditions.

The Automobile Association reported a dramatic increase in the number of emergency calls because of the severe weather.

"Yesterday we had more than 16,000 breakdowns which was nearly double a normal Wednesday," AA spokesman Peter Barnao told CNN.

As parts of the UK were digging out from as much as 40cm of snow, much of the country shivered under a blast of arctic air that saw temperatures plunge to -18 degrees Celsius in some areas overnight.

The Met Office warned that icy conditions would continue over the next few days and that exceptionally low temperatures would cause widespread ice and transport disruptions.

The rest of northern Europe was also gripped by one of the coldest nights in decades as temperatures plummeted to below -40C in some places.

The central Norwegian town of Roeros recorded an overnight temperature of -41C -- one its coldest recorded temperatures.

In Poland, freezing conditions claimed more lives as the death toll climbed to more than 120 people, according to a spokesman for the Polish National Police. Overnight temperatures dropped as low as -20C.

Germany continued to deal with heavy snowfall and temperatures were as low as -20C in some areas.

The latest Arctic blast is set to continue over much of northern Europe over the next few days.