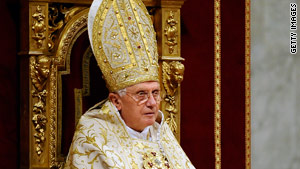 In his address, called "If You Want to Cultivate Peace, Protect Creation," the pope said peace with the natural environment is the beginning of peace with all of God's creation, including people.

"Respect for creation is of immense consequence, not least because creation is the beginning and the foundation of all God's works, and its preservation has now become essential for the pacific coexistence of mankind," the pope said.

The papal message of peace comes a week after the traditional Christmas address known as "Urbi et Orbi" -- Latin for "To the City and the World" -- a message of hope for the world's afflicted. During the Christmas Eve Mass the night before, Benedict was dragged to the ground after a woman jumped a barrier and grabbed his robes. The pope appeared uninjured.

In his homily, the 82-year-old pontiff asked parishioners to consider the possible effect of an ecological crisis on the stability and peace of the world -- a world in which there is increasing competition for the "fruitfulness of the Earth."

"Can we remain impassive in the face of actual and potential conflicts involving access to natural resources?" the pope asked Friday. "All these are issues with a profound impact on the exercise of human rights, such as the right to life, food, health and development."

"Technologically advanced societies must be prepared to encourage more sober lifestyles, while reducing their energy consumption and improving its efficiency," while preparing "sustainable strategies to satisfy the energy needs of the present and future generations," he said.

Pope Benedict XVI challenged the faithful to be good stewards of what "God has given us," suggesting that peace with the Earth will lead to peace on Earth.

"For this reason, it is imperative that mankind renew and strengthen that covenant between human beings and the environment, which should mirror the creative love of God, from whom we come and toward whom we are journeying," he said.