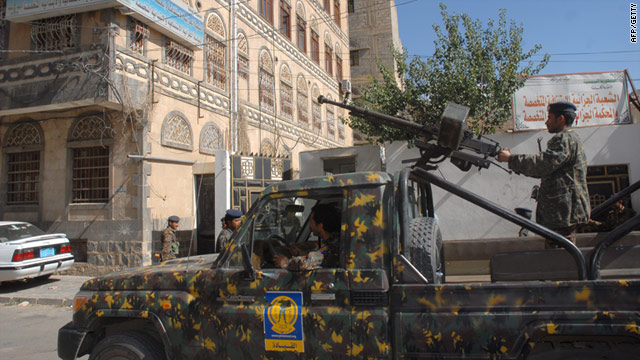 Yemeni security forces on patrol in the capital Sanaa -- the country is expanding its anti-terror forces says the government.
STORY HIGHLIGHTS
RELATED TOPICS

(CNN) -- Yemen is embarking on a major initiative in its war on terror and plans to build four new branches for the country's elite counterterrorism units next year, a spokesman for the country's American embassy said on Saturday.

Hadramawt, Albasha said, will have the largest contingent of counterterror units.

"This is the next phase in the war on terrorism - we are bringing the fight to al Qaeda."

Yemen has been locked in a struggle with al Qaeda in the Arabian Peninsula, or AQAP, the offshoot of the al Qaeda terror network based in Yemen.

It grabbed the attention of the west with the attempted bombing of a Northwest Airlines trans-Atlantic flight as it landed in Detroit, Michigan, on Christmas Day in 2009.

According to a Yemeni government official, international partners such as the United States, the United Kingdom and Gulf Cooperation Council member countries like Saudi Arabia will assist in training and equipping the Yemeni forces in the new branches.

The official, who asked not to be named because he was not authorized to speak to the media on the matter, told CNN, "One of the main reasons this is happening -- and one of the main ideas behind building these branches and training these forces -- is because air strikes have caused a lot of collateral damage."

"This will, hopefully, minimize collateral damage in the future," he said.

The four new counterterrorism branches "have been in the works for a while now," said the official.

"This year, the plans were pushed forward," he said. "The branches should be built in 2011."

Yemen's government, which has little control over many parts of its territory, has openly asked for U.S. assistance to target militants -- though some officials have criticized their counterparts in Washington for not acting quickly or effectively enough.

In an interview with CNN in November, Yemen's Foreign Minister Abu Bakr Abdullah Al Qirbi said, "It wasn't really until last year that the Americans have been heavily involved in building our counterterrorism capability and providing us with equipment."

Over the past year, U.S. Special Forces have expanded the type of training they are giving to Yemen's military, while also adding more Special Operations forces to the training mission there.

Earlier this year, Defense Secretary Robert Gates approved spending $150 million to train and equip Yemen's security forces, specifically so they can fight al Qaeda. That includes helicopters, planes and other equipment and it more than doubles the amount of aid the U.S. military authorized in 2009.

According to the Yemeni government official, Sanaa will get another four Huey II helicopters in 2011 -- all of which should be operational by year's end.

A senior defense official told CNN last month that the United States and Yemen have shared surveillance and intelligence on AQAP activity inside the country.

Last week, at a forum at the Carnegie Endowment for International Peace, John Brennan, assistant to the president for homeland security and counterterrorism, said AQAP is "increasingly active" in reaching out to find terrorist recruits, even in the United States.

"Al Qaeda in the Arabian Peninsula is now the most operationally active node of the al Qaeda network," Brennan said.

According to a statement released by the While House, Brennan called Yemeni President Ali Abdullah Saleh on Thursday and emphasized "the importance of taking forceful action against al Qaeda in the Arabian Peninsula in order to thwart its plans to carry out terrorist attacks in Yemen as well as in other countries, including in the U.S. Homeland."

Earlier this month, a vehicle carrying U.S. Embassy personnel in Yemen was attacked but nobody was injured.

In October the motorcade of the British deputy ambassador was attacked and in April the British ambassador's car was the target of a failed bomb attack.

While it is not yet known who is responsible for that attack, the State Department's most recent travel advisory for Yemen warns Americans of threats to U.S. interests due to active terrorist activity, specifically from AQAP.

Embassy employees in Sanaa are instructed to use caution when visiting restaurants, hotels or tourist areas in the capital and are forbidden from traveling outside the capital.