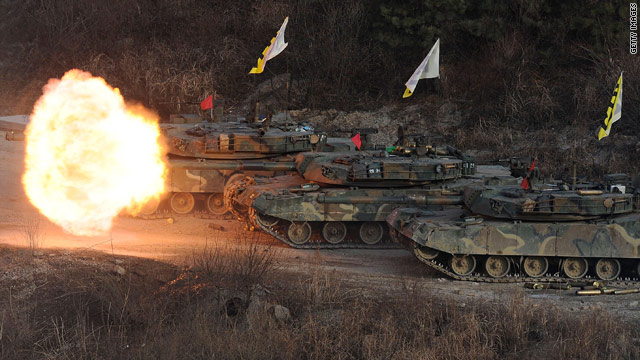 "The revolutionary armed forces of the DPRK (Democratic People's Republic of Korea) are getting fully prepared to launch a sacred war of justice of Korean style based on the nuclear deterrent at anytime necessary," North Korea's defense minister Kim Yong Chun said, according to the state-run news agency.

"The South Korean puppet forces perpetrated such grave military provocation as renewing their shelling against the DPRK during their recent exercises for a war of aggression in the West Sea of Korea," Chun said. "This indicates that the enemy's scenario for aggression aimed at the start of another Korean War, has reached the phase of its implementation.

The long-planned South Korean exercises, billed as the largest land and air winter drills, were conducted just 15 miles from the North Korean border.

The drills took place on undisputed South Korean territory but it was the timing that was worrisome to the region. Tensions have been running high since the sinking of the South Korean warship Cheonan last March, killing 46 sailors.

South Korea and the international community blamed the North for the Cheonan incident, but Pyongyang denied the accusations.

South Korea said its Navy was simply holding drills and conducted similar naval exercises again on Monday, drawing threats from Pyongyang that it would attack again. But that did not happen.

"In the case of another surprise attack, the country must launch a merciless counterattack," Lee said.

The hostilities come amid transition in North Korea -- the ailing leader Kim Jong Il is believed to be in the process of transferring power to his son, Kim Jong Un. Some analysts believe the upcoming internal changes have prompted the North to flex its military muscle.

Korea became a divided nation after Japan's defeat in World War II: the free-enterprise South and the communist North.

Over the past six decades, small-scale skirmishes have flared repeatedly along both land and sea borders as each state aimed to reunify the peninsula according to its own terms and system of government. Deadly naval clashes occurred along the demarcation line in 1999, 2002 and 2009.