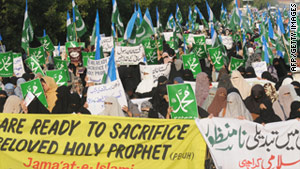 Moulana Amjad Khan, spokesman for the Jamiat Ulema-e-Islam-Fazal ur Rehman (JUI-F) party, said the JUI-F and other religious parties are going to hold the rallies on December 24.

Religious parties have been upset since the governor of Punjab province, Salman Taseer, helped file a mercy petition with Zardari's office, requesting a pardon for Asia Bibi, a Christian woman sentenced for death for blasphemy.

In November, a Pakistani court found the 45-year-old Bibi guilty of defiling the name of the Prophet Mohammed during a 2009 argument with Muslim fellow field workers. The offense is punishable by death or life imprisonment, according to Pakistan's penal code.

I will pay 500,000 rupees for the loyal follower of Muhammad who beheads Asia Bibi.
--Moulana Yousaf Qureshi
RELATED TOPICS

But an investigation by a Pakistani government ministry found the charges stemmed from "religious and personal enmity" and recommended Bibi's release. Zardari has said he would pardon Bibi, but a court has ruled that the president can't act until the sentence is confirmed by a higher court -- a process her lawyer says could take two to three years.

A Pakistani cleric is offering a nearly $6,000 bounty for anyone killing Bibi.

Moulana Yousaf Qureshi made his announcement in early December, condemning any effort by Zardari to pardon or release her.

"I will pay 500,000 rupees for the loyal follower of Muhammad who beheads Asia Bibi," Qureshi told a crowd of several hundred people. The amount is equivalent to about $5,800, or more than six times the country's average annual wage.

About 2 million Christians live in Pakistan, making up slightly over 1 percent of the officially Islamic nation's population of about 170 million, according to government statistics.