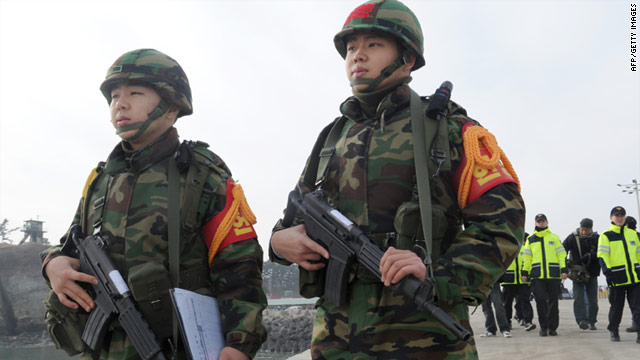 Seoul, South Korea (CNN) -- South Korea downplayed North Korea's decision to not follow through on threatened retaliation to its live-fire military drill this week as political maneuvering, according to a key South Korean military official.

Seoul is working to adjust its security approach, believing that North Korea might launch less conventional attacks -- including possible terrorist strikes on large civilian gatherings, according to the South Korean government official. South Korea might also strengthen its intelligence capability, the official said, calling it increasingly crucial to its defense.

The South Korean live-fire naval drill ended peacefully Monday after an hour and 34 minutes. After once threatening the exercise could spur a war, North Korean military leaders said retaliation wasn't necessary but issued a stern warning to South Korea and the United States, according to the state-run Korean Central News Agency.

Blitzer: How conflict was averted

In recent days, the North agreed to allow U.N. inspectors access to its uranium-enrichment facility and take other steps that could defuse tension if implemented, including consideration of the formation of a military commission between North Korea, South Korea and the United States.

Those steps generated at least the possibility of rare optimism on the Korean peninsula, which has been gripped by anxiety since the sinking of a South Korean warship killed 46 sailors in March.

The latest developments in North Korea came amid a visit to North Korea by Bill Richardson, the former U.S. ambassador to the United Nations and current governor of New Mexico. Richardson was acting as a private citizen and not a U.S. envoy

Seoul had no official reactions to two proposals -- one to set up a hotline between South and North Korean military leaders and another to have a commission to settle simmering disputes before they flared into full-on military confrontations -- that Richardson said North Korean leaders were receptive to.

I think they're trying to win the hearts and minds of the people in South Korea.
--Professor Han Park
RELATED TOPICS

Still, the fact that Pyongyang agreed to consider engaging in a multilateral dialogue with other nations through the commission is significant, said Han Park, a professor at the University of Georgia's School of Public and International Affairs and director of the university's Globis Center for the Study of Global Issues.

Park said such a commission would likely discuss one of the most pressing issues -- the boundary in territorial waters.

"I think that will continue to be a source of problems," Park said. North Korea's nuclear program might also be discussed, he said.

There also was talk about creating a hotline between the two nation's militaries "to avert potential crises," according to a statement from Richardson. But Park noted that hotlines have previously been in place, but when tensions escalate, both sides will cut off the line.

"I am encouraged by the news that North Korea will not react militarily to South Korea's drills," Richardson said in the statement. "During my meetings in Pyongyang, I repeatedly pressed North Korea not to retaliate."

Asked whether North Korea could be waiting for its southern neighbor to drop its guard before retaliating, Richardson told CNN that is possible but said he thinks the fact that Pyongyang "took responsible action" shows they are moving into a new chapter.

The South Korean military remained on high alert after the drill ended and is observing the North carefully, the country's Joint Chiefs of Staff said Monday. During the drill, fighter jets took to the sky in preparation for possible North Korean retaliation, according to the South Korean defense ministry.

The South Korean president's office defended the drill Monday, saying, "In a divided country that is militarily pitted against each other, it is natural that as a sovereign country, we will conduct military exercises and defend our territory."

After the drill ended, North Korean state-run media reported why the North did not react militarily:

North Korean military officials also said the United States and South Korea perpetuated military provocation, "far from drawing a lesson from the disgraceful defeat they suffered" from the Yeonpyeong shelling, according to KCNA.

China's deputy permanent representative to the United Nations, Wang Min, has reiterated China's call for both Koreas to return to the negotiating table.