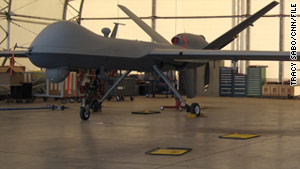 The United States does not officially confirm that it has unmanned aircraft firing missiles at targets in Pakistan.
STORY HIGHLIGHTS
RELATED TOPICS

Islamabad, Pakistan (CNN) -- Intense drone activity in Pakistan's tribal region has moved northward, mirroring the movement of suspected militants as they try to flee the targeted strikes, according to a senior Pakistani military official.

Officials have seen an increased militant presence in Khyber Agency, one of the seven districts of Pakistan's tribal region bordering Afghanistan, said the official, who did not want to be named due to the sensitivity of the operation.

Specifically, he says "they are moving into the Tirah Valley."

The strikes, which targeted suspected militant hideouts and a training camp, killed 57 people -- a record for a single day. Officials say all three hit within 4 square kilometers of each other.

According to a CNN count, no drone strikes had been reported in Khyber Agency until Thursday, when an attack killed seven suspected militants -- also in Tirah Valley.

The official said he wants more Pakistani control over the drone program.

"It would save lives," he said, referring to the civilian casualties some of the drone strikes have caused.

Meanwhile, the official said Pakistan's military is planning to mount an offensive in the country's North Waziristan region aimed at rooting out suspected militants who use the safe haven to plan attacks.

A six-month time frame "is about right" for when the military might move in the area along Pakistan's northwest border with Afghanistan, the official said, adding that it will likely take place by the summer.

NATO officials say militants have been using North Waziristan as a haven to rest, train and plan attacks before crossing the border into Afghanistan. The Pakistani Taliban "remains enemy No. 1," the Pakistani official said.

"They are responsible for much of the internal attacks within Pakistan," he said.

But even while providing a timeline for the offensive, the official indicated that the military is being pressured by the United States to carry out the operation.

He said the military is tired and stretched thin after more than a year and a half of fighting in the tribal areas.

"When an American finishes fighting in Afghanistan, he goes home ... to Florida or Texas or something. He's with his family, he can relax. And remember, he's only in Afghanistan for one year," he said. "Because of rotation schedules and logistics, our soldiers are out there for two and a half years. And when they go home ... to Karachi or other villages ... they have to deal with local militants there. Our problem is not just along the border, so they have to protect their families and still work in those areas."

The official said the military does not want to mount a new offensive unless officials are sure they can keep control of the area.

"The Pakistani military does not want to see a reversal. That would be the worst possible outcome," he said, recalling incidents in Bajaur Agency, where the military cleared out insurgents, left, and then saw militants move back into the area within a short amount of time.

As the United States pressures Pakistan to do more on its side of the border, they have to take responsibility for the weakness on the other side, he said, noting in particular the increase in border checkpoints in Pakistan.

"What is being done on the other side? There has to be an equal effort on the Afghanistan side as well," he said.