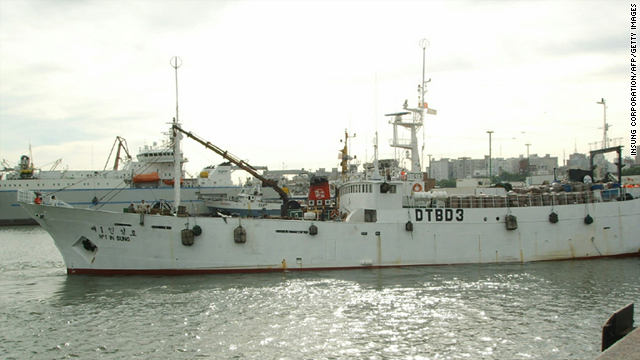 This photo shows the South Korean fishing boat the No. 1 Insung at an unknown port.
STORY HIGHLIGHTS
RELATED TOPICS

(CNN) -- The search has been suspended for 17 crewmen missing at sea after the sinking of a Korean fishing vessel in the frigid ocean waters around Antarctica, a New Zealand rescue agency said Tuesday.

Twenty survivors and five dead were were recovered after the Korean-owned-and-operated No. 1 Insung sank Monday about 1,150 miles north of McMurdo Base, the Rescue Coordination Centre New Zealand said.

Wilson said the extremely cold sea temperatures -- barely above freezing -- meant that survival times in the water "would be very short."

"We understand the vessel sank very quickly and the crew had to abandon ship without time to put on adequate emergency gear," he said. "Sadly, it is exceedingly unlikely that anyone not picked up yesterday could have survived."

Weather conditions, which were relatively mild at the beginning of the search, deteriorated Tuesday as a blizzard and fog moved in, Wilson said.

The 58-meter (190-foot) fishing trawler left on November 2 from South Korea to fish in Antarctic waters, said Ham Un-Shik, a spokesman with the Busan Coast Guard in South Korea. It had 11 Indonesians, 11 Vietnamese, eight Koreans, eight Chinese, three Filipinos and one Russian on board, he said.

There was no emergency radio call before the incident, and it is still not clear what happened, Henderson said.