Kidnapped by the Taliban 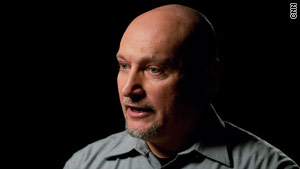 Editor's Note: CNN's "Taliban" documentary explores filmmaker Paul Refsdal's embed with the Taliban and reveals the Taliban at war and at rest, preparing weapons and coordinating ambushes, praying, playing, even at home with their families.

(CNN) -- In November 2009, Norwegian freelance journalist Paul Refsdal is riding in a pick-up truck on a dusty track of Afghan road. The Taliban have kidnapped him.

If the truck turns right, he knows he's being sold to another militant group. A left turn means his kidnappers have decided to let him go.

His journey started when Refsdal, who wanted to document the daily lives of the Taliban, accepted the invitation of a Taliban commander to film him and his fighters. Refsdal later accompanied another Taliban commander, Omar, to his hideout on a second embed.

As part of CNN's "Taliban" documentary, Refsdal talked with CNN's Anderson Cooper about going from invited guest to kidnap victim -- a harrowing experience that began the way it later ended, with Refsdal in a truck. Here is an edited excerpt:

REFSDAL: We rent a pickup truck and we drive into this valley that doesn't really have a road. I'm told it is not possible to drive anymore. We will have to walk for several hours up the hillside to one village, and we have to sneak a little bit. Omar is very particular about I should cover my face. I assume this is because they don't want informers to see that there's a foreigner coming. And we sleep in a house, and everything seems OK.

Then, the next day we are asked to go to another house, just 100 meters down the hillside. We have to wait there, because they're going to have a meeting. After a couple hours, one of the fighters comes and says he's from al Qaeda. And he says that he has information that I was spying for the coalition, so both my translator and I will be executed tonight. And he goes on, saying that we're going to be killed with a knife.

... He explains how much he hates foreigners and he wants to eat the flesh of foreigners. In the first moment, you are shocked. But then, I kind of go on autopilot. I know what to say. I have some pre-prepared arguments. You know, describing why I cannot be a spy. Why I'm not responsible for what my government does. And then he starts talking about money. And I am so happy. I mean, I don't smile, but I am so relieved.

COOPER: Once he starts talking about money, you're happy?

REFSDAL: Yes. Because then I know this is just business; that all of the talk about eating flesh and beheading is just nonsense.

ANDERSON: For your life?

REFSDAL: Yeah. But, you know, that's Afghanistan. You never pay the asking price, so to say.

So, we're making a counteroffer of $20,000. And they come back with other options, other alternatives for granting my freedom: a prisoner exchange, or ransom, or I convert to Islam. But, if none of these three, then it's beheading. So, I send the kidnappers the message that yes, in that situation, I could convert to Islam.

I convert to Islam on the second day of the kidnapping. I keep my word. But Omar, he doesn't keep his. I am not released. And the day after, we are back to the $20,000 and how can we get the money here.

Because the kidnappers are amateurs, they give me the phone to call around to get the money. I mean, this is Afghanistan and things there are quite absurd sometimes. I'm negotiating with the kidnappers, and I'm making my own ransom phone calls. I call al Jazeera, and I call the Norwegian embassy. With Al Jazeera, I speak in English, a language the kidnappers do not understand. Talking with my embassy, I speak in Norwegian, and you know, I can start giving information, where I'm kept, how many people are in the house, et cetera, et cetera, under the pretext of arranging for the money.

So, we're waiting. And then, suddenly, there's a new development. The man from al Qaeda speaks with my translator. And my translator explains that Omar has an offer from another group. The other group wants to buy me for $50,000, and that's bad news.

COOPER: That's really bad news, because groups do trade hostages. ... Do you start to get really scared?

REFSDAL: Yes. I understand things are starting to get out of control. If this other group pays Omar $50,000 for me, what ransom do you think they will demand? I mean, it will be at least $250,000, probably half a million or even more. This is not a good position.

Between the fifth and the sixth day-- Omar is receiving phone calls, as far as I know, from his spiritual leader in Pakistan, from the Taliban spokesman, and also apparently from the commander of the Pakistani Taliban. And all of them are saying that he should release his hostage. So, Omar is under pressure from the Taliban to release me.

REFSDAL: For the main leadership, let's say, of the Taliban, it is embarrassing for them that a hostage converting to Islam is still being held.

On the sixth day, the fighter from Al-Qaeda comes and he says, "Today, you're gonna be released." Of course, we don't believe him, because he's been lying all during the whole situation. Later, two other fighters arrive. And one of them is carrying my video camera. They want to make an interview. They ask me, "Have you been beaten by the Taliban, by the fighters?" And I say no. "Are you gonna inform the Americans about our positions?" And I say, "Of course not."

And that's it. Then we are told we are leaving. So we walk south out of the valley for five hours. The night comes and we reach a dirt road. There is a pick up truck there with three men I'd never seen before. And we are just left with these three men. So we don't really know, are we sold or are we free?

COOPER: And so, you knew you were going to be free?

ANDERSON: That must have been the greatest left turn of your life.