China's support of North Korea grounded in centuries of conflict 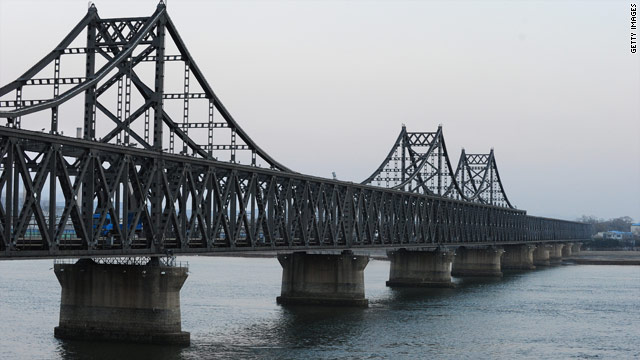 A truck crosses the Sino-Korean Friendship Bridge which links the N. Korean town of Siniuju to Dandong (L) in northeast China.
STORY HIGHLIGHTS

Seoul, South Korea (CNN) -- Having just enjoyed Thanksgiving dinner, the American soldiers were told they would be home by Christmas as they launched their final offensive.

In fact, they were driving into the greatest ambush in modern history.

Twelve miles to their north, 380,000 brilliantly camouflaged enemy fighters lay in wait. In the days that followed, the U.S. Army would suffer its most harrowing ordeal of the past half-century.

Two American regiments were massacred at a pass called Kunu-ri; another was annihilated beside a frozen lake called Chosin.

The time was 60 years ago; the battlefield was North Korea; the enemy was China's People's Liberation Army.

Despite wide-ranging global changes -- the fall of European communism, the end of the Cold War, China-U.S. rapprochement, the rise of China as economic superpower -- there has been no indication that Beijing has altered its stance toward maintaining the isolated regime in the peninsula's north since it routed U.S.-led United Nations forces in Korea in the winter of 1950.

"China does not want to lose North Korea as a buffer zone vis-a-vis a pro-U.S. country -- South Korea," said Kim Won-ho, dean of the Graduate School of International Studies at Hankuk University of Foreign Studies.

Explainer: All eyes on North Korea

"The last thing China wants to see is U.S.-style democracy in North Korea," added congresswoman Song Sun-young, who sits on the South Korean National Assembly's Defense Committee. "Even if they apply open-door policies to their markets, China wants North Korea to follow the Chinese style."

While it is globally fashionable to view today's China through an economic lens, it is geopolitics, not economics, that lies behind Beijing's continued support of North Korea: The strategic position of the peninsula has not changed for millennia.

"Korea has always been a dagger into Russia, and an invasion and penetration route between Japan and China," said Kim Byung-ki, a security expert at Korea University. "This is why China has always had this important interest in the peninsula."

History seems to prove it. The Mongol rulers of China unleashed two 13th-century assaults on Japan from Korea. Japan launched a 16th-century invasion of Ming China via Korea. The first Sino-Japanese War, from 1894 to 1895, was largely fought in Korea.

In the past century, the Russo-Japanese War of 1904-1905 was over control of the peninsula. Japan used Korea as a springboard to seize Manchuria in 1931, from whence it assaulted China proper in 1937. Finally, the Korean War brought U.S. troops close to the Chinese border in 1950.

Today, the United States has replaced Russia and Japan as China's key regional competitor in Asia, Kim said, and the United States is encircling China with a range of moves and alliances -- with Afghanistan, India, the ASEAN regional forum, South Korea, Japan, and even Russia -- all backed up by the power of the Seventh Fleet.

"China will be a rising power for the next 10-15 years," Kim said. "But it understands it has problems with this encirclement."

In this context, North Korea, in addition to its strategic position on China's doorstep, is a rare voice of support buttressing China's historical role at the heart of Asia.

"In the past, China never accepted Korea or Mongolia or Vietnam as independent countries; they were vassal states, subject to Chinese power," said Lim Jie-hyun, a history professor at Hanyang University. "There is continuity and discontinuity, but (for China) to make a hegemonic block in northeast Asia, it needs other voices, and that voice is represented by North Korea."

Although the bellicose, isolated regime is a massive diplomatic embarrassment for China, Beijing's stance toward it fits with its policy toward other neighbors -- a policy that prioritizes stability.

"Some of the reasons for China's excessively moderate rhetoric is consistent with what it would have to do to maintain stable relations with any regime," said Bob Broadfoot, head of Hong Kong's Political and Economic Risk Consultancy. "China has a policy to maintain smooth relations with countries on its borders; it has more countries on its borders than any other country in the world."

Some of the reasons for China's excessively moderate rhetoric is consistent with what it would have to do to maintain stable relations with any regime.
--Analyst Bob Broadfoot
RELATED TOPICS

Even so, China is quietly hedging its bets, Lim said, noting that Beijing offered sanctuary to a group of anti-Kim Il-sung North Koreans who fled the state in the 1960s.

"It seems the Chinese government is fostering an alternative political group who could take over power immediately if there was a collapse of North Korea," Lim said.

Broadfoot agreed: "I can see scenarios where the regime is toppled, but I think that any succession in North Korea will involve people China has a relationship with. I don't see insider groups emerging in North Korea who are enemies of China and friends of the United States."

Meanwhile, South Korea's relationship with China is conflicted. While its key political ally remains the United States, its largest trade partner is China: China and South Korea saw bilateral trade of $156 billion in 2009, versus trade of $2.75 billion between North Korea and China in 2008, before the latest round of sanctions were imposed in 2009.

Yet Seoul has been unable, or unwilling, to use its economic clout to influence Beijing in taking a harder line with Pyongyang.

More worrying for South Korea is China's status as both the top investor in, and top subsidizer of, North Korea. This factor has led some members of South Korea's parliament to fret about creeping control, even economic colonization.

"Chinese interest in the peninsula has become stronger, and how they can strengthen their strategic position is not necessarily military, it is economic," said congresswoman Song. "If they can control the economy, they can control politics and strategy; that is why they constantly subsidize North Korea."

Hence, even amid acute military tensions, Seoul is reluctant to shut down the Kaesong Industrial Complex, the South Korean-funded and -managed industrial park that employs some 40,000 North Korean workers in more than 100 southern-run factories. To do so would case the south to lose the only significant bridgehead it has in the north's economy.

Not everyone is convinced that even the stout diplomatic umbrella and economic purse that Beijing offers Pyongyang translates into significant leverage over one of the world's most recalcitrant regimes.

"If China came out strongly against North Korea, it could embarrass China and show that it does not have influence," said risk analyst Broadfoot.

There may also be resistance in Beijing to do anything that could drive the strategically positioned regime on its doorstep into the arms of a competing power.

"If China put on too much pressure, North Korea might fall into the arms of Russia, or even improve relations with Japan or the United States," said Korea University's Kim, noting that North Korea could play China and Russia against each other as Vietnam did.

Now, as a U.S. carrier battle group steams toward the Yellow Sea for exercises with its South Korean ally, it looks set to antagonize Beijing, further tightening the China-North Korea "blood forged" partnership.

"Any kind of conflict around China would be a threat to their political stability," said Hankuk University's Kim. "And in the long term, they will never want to have a border with any pro-U.S. country."

Six decades after China crossed the Yalu River to fight in Korea, the competing alliances borne of that conflict -- the world's last remaining Cold War battlefront -- remain firmly in place.