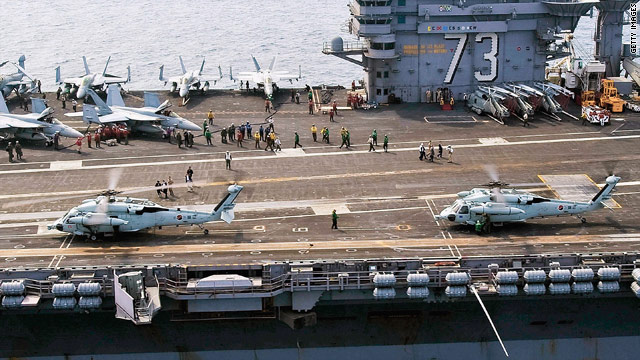 A carrier strike group led by the USS George Washington is steaming toward the Korean peninsula.
STORY HIGHLIGHTS

Meanwhile, South Korea said Thursday that it will strengthen and supplement its rules of engagement in the Yellow Sea, following Tuesday's shelling by North Korea.

Marine forces based in five islands near North Korea and the disputed Northern Limit Line also will be reinforced, a government spokesman said.

The tense maritime border between the two Koreas has become the major military flash point on the peninsula in recent years.

The announcement followed a meeting between President Lee Myung-bak and his economic and security ministers Thursday morning in Seoul.

The meeting began with a moment of silence for the two South Korean marines and two civilians who died in Tuesday's attack on Yeonpyeong Island in the Yellow Sea. The shelling also injured 15 South Korean soldiers and three civilians.

The attack will lead to a plan being drafted to deal with civilian safety on the five islands in the Yellow Sea, the spokesman said. No details were immediately offered about the plan, but Lee on Wednesday ordered the strengthening of civilian shelters on the islands.

The islands include Yeonpyeong and Baengnyeong, off which the South Korean warship Cheonan was sunk in March, killing 46 sailors. Seoul blamed Pyongyang for the torpedo attack, which the North has denied.

The attack on Yeonpyeong Island was the first direct artillery attack on South Korea since the Korean War ended in 1953.

The USS George Washington sailed toward volatile waters off the Korean peninsula Wednesday for the exercises in a show of force designed to deter a further escalation of hostilities with North Korea.

The exercises were billed as defensive in nature and were a more measured response than the retaliation initially urged by South Korea after North Korea's shelling of Yeonpyeong.

"It is a long-planned exercise," said Adm. Mike Mullen, chairman of the U.S. Joint Chiefs of Staff.

"That said, it is meant to send a very strong signal of deterrence and also work with our very close allies in South Korea," Mullen said on CNN's "Fareed Zakaria GPS." "We're very focused on restraint --- not letting this thing get out of control. The South Koreans so far have responded that way. Nobody wants this thing to turn into a conflict."