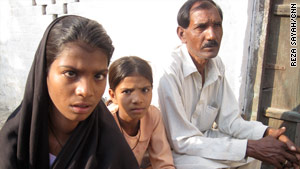 Asia Bibi's family has been fighting for her release for nearly 15 months.
STORY HIGHLIGHTS
RELATED TOPICS

Islamabad, Pakistan (CNN) -- A preliminary investigation shows that a Pakistani Christian woman has been falsely accused of insulting the Prophet Mohammed, a government official said Monday.

"The president asked me to investigate her case and my preliminary findings show she is innocent and the charges against her are baseless," Pakistani Minister for Minority Affairs Shahbaz Bhatti told CNN.

Asia Bibi, who has been jailed for nearly 15 months, was convicted in a Pakistani court earlier this month of breaking the country's controversial blasphemy law, a crime punishable with death or life imprisonment, according to Pakistan's penal code. She was sentenced to death.

Bhatti emphasized Monday that he has reached only preliminary conclusions and will submit a final report Wednesday to Zardari's office.

Prosecutors say Bibi, a 45-year-old field worker, insulted the Prophet Mohammed after she got into a heated argument with Muslim co-workers who refused to drink from a bucket of water she had touched.

In a brief news conference at the prison where she's being held, Bibi said Saturday that the allegations against her are lies fabricated by a group of women who don't like her.