U.S., NATO troops to stay in Afghanistan beyond 2014 handover 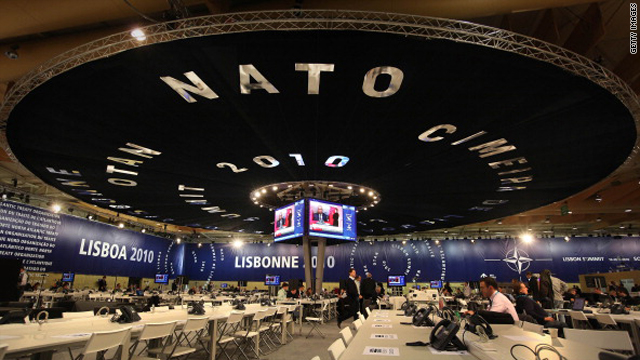 Journalists work in the press centre of the NATO Summit on November 18, 2010 in Lisbon, Portugal.
STORY HIGHLIGHTS

Lisbon, Portugal (CNN) -- Even with serious questions about President Hamid Karzai's commitment to the military strategy in Afghanistan, NATO members plan to announce an enduring presence there beyond 2014, the new target date for handing off security control to the Afghans.

At its weekend summit, NATO members will tout a three-year plan to transfer security responsibilities by 2014 to the Afghans, beginning early next year on a phased, conditions-based timeline, NATO officials told CNN.

NATO members plan to offer a message of reassurance to Afghanistan that the alliance will remain engaged after security control is transferred to Afghan forces. NATO will endorse an "enduring partnership" with Afghanistan, specifically focused on developing Afghan security forces and police, officials said.

Canada has already committed more than 900 personnel to train Afghan security forces, and other nations, including the Netherlands, are expected to follow suit.

But many troops from other nations will deploy to Afghanistan in noncombat roles, leaving more of the fight to the U.S. and British contingents.

U.S. President Barack Obama's challenge will be to urge wary NATO allies to stay the course in Afghanistan despite mixed results, growing public frustration, and the beginning of a drawdown of U.S. troops next summer, U.S. officials said.

Observers of the Afghan war said they will be keenly focused on Day 2 of the summit, Saturday, when Karzai is set to address the 48 NATO partners who make up the International Security Assistance Force.

Afghan officials said Karzai will seek specifics on how Afghans will work with NATO forces during the transfer of power. Karzai favors a joint command structure that would include the Afghan military.

The pivotal NATO summit comes amid heightened tensions between Karzai and his allies.

In an interview with the Washington Post published on Sunday, Karzai was critical of the U.S. military and called for a reduced U.S. military role. He said U.S. raids on insurgent targets at night were counterproductive and incited support for the Taliban.

Rankled by those comments, the top NATO commander in Afghanistan, U.S. Gen. David Petraeus, said Karzai's remarks could undermine the war effort. He warned the U.S.-Afghan partnership could be "untenable" if Karzai wants U.S. troops out of Afghanistan prematurely.

The two men met Wednesday to try and defuse tensions.

Afghan officials said Karzai supports the raids on insurgents but faces intense pressure from the Afghan public, which has protested civilian deaths. He is also balancing the fight against the insurgency with a desire for political settlement, the officials said.

U.S. officials explained Karzai's comments as being in line with NATO's announcement at the summit on the transfer of control.

"We read President Karzai's interview as a call for an Afghanistan that eventually is stable, fully sovereign and self-reliant. And in that call, we have a lot in common," said Doug Lute, the special assistant to the president for Afghanistan and Pakistan.

"We're talking mostly a difference of timelines," Lute told reporters Tuesday. "It's a question of whether you're reading President Karzai's call for immediate changes or whether he's talking about changes which we all eventually want to see together."

But other Western officials have voiced concern that Karzai is undermining the war effort at a time that NATO-led forces are regaining momentum against the Taliban.

Ambassador Mark Sedwill, NATO's senior civilian representative in Afghanistan, said Wednesday that coalition forces have "regained the initiative" in the war, but said Karzai's remarks were "not helpful" in the lead-up to the Lisbon summit.

One senior European official said he hoped NATO members would have a "genuine" discussion about Karzai's continued public criticism of the NATO strategy. The official did not wish to be named in order to speak more frankly.

"Yes, we all share the goals he states, but at the moment, we are here because of a United Nations mandate, and we need to explain that Afghanistan is not fully sovereign and we are still in a transition and he has to support that, not undermine it. The West is getting confusing signals and President Karzai has to be confronted that this does damage to his cause."

Stephanie Sanok, a senior fellow at the Center for Strategic and International Studies, said she expects some sort of statement from Karzai to be issued at the end of the summit. His criticism, she said, ultimately contradicts NATO's strategy and he may have to set the record straight.

"At the end of the day, the night raids have been successful," she said. "Ending them is really not an option. What I don't understand is what Karzai hoped to gain by those comments."

Several Western officials said results on the battlefield were improving, but not the capability of the Afghan government, which has come under fire in the past for being corrupt and inept.

They said NATO allies need to intensify their engagement with the government to increase its capacity for development, governance and delivering services to the people.

"We are managing the 'clear' part, but who is going to 'hold and build' going forward?" one senior European official asked. "That capacity to govern is not there, and it will need to be if the Afghans want to take the lead."