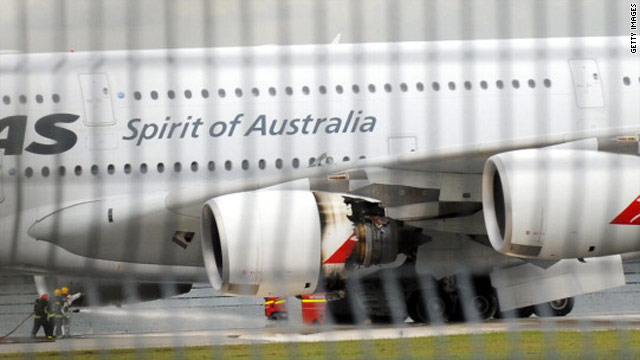 The Qantas Airbus A380 plane after its emergency landing at Changi International airport in Singapore on November 4.
STORY HIGHLIGHTS
RELATED TOPICS

(CNN) -- Rolls-Royce said Friday that the failure of a specific component of its Trent 900 engine caused an oil fire that then forced a Qantas A380 to make an emergency landing.

"The failure was confined to a specific component in the turbine area of the engine," the engine maker said. "This caused an oil fire, which led to the release of the intermediate pressure turbine disc. "

The incident will cause the company's full year profit growth to be slightly lower than "guided," Rolls-Royce said Friday. In July, the company had predicted its underlying profits would grow between four and five percent compared to 2009.

On Monday, Qantas CEO Alan Joyce told reporters the planes will not return to service until the airline is "100 percent sure" about their safety.

Oil leaks have been discovered in engines on three planes, and investigations continue, Joyce added. The leaks were beyond normal tolerances, he said.

On November 4, a Qantas flight was forced to return to Singapore's Changi Airport after one of its engines shut down and the engine's covering, or cowling, tore off above the western Indonesian island of Batam.

The Australia-bound flight was carrying 440 passengers and 26 crew members.