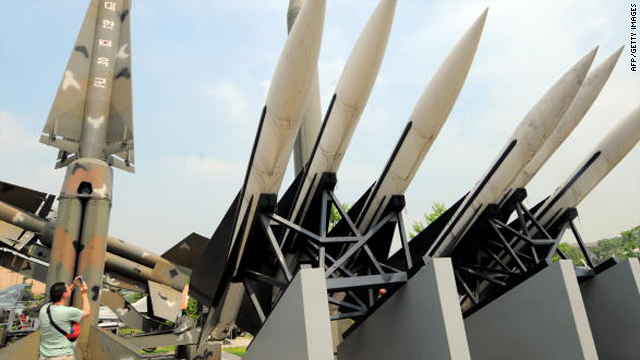 A visitor takes pictures of replicas of North Korea's Scud-B missile, center green, and South Korean missiles that are displayed at the Korean War Memorial in Seoul on June 28, 2010.
STORY HIGHLIGHTS
RELATED TOPICS

The 75-page report, complied by a seven-member panel reporting to the United Nations Security Council, states that North Korea is involved in "nuclear and ballistic missile-related activities in certain countries, including Iran, Syria and Myanmar" and that special attention should be given by all member countries to inhibit such activities.

The report, which was released this week, had been delayed from publication for six months by China, a friendly nation to North Korea, according to a diplomat familiar with the case. The diplomat spoke in a background briefing and did not want to be identified.

The experts write that North Korea is getting around U.N.-imposed sanctions and is masking financial transactions by the use of "overseas entities, shell companies, informal transfer mechanisms, cash couriers and barter arrangements." The report goes on to state that North Korea "has established a highly sophisticated international network for the acquisition, marketing and sale of arms and military equipment, and arms exports have become one of the country's principal sources for obtaining foreign exchange."

The report detailed some of the ways is says North Korea -- formally known as the Democratic People's Republic of Korea (DPRK) -- gets around U.N. sanctions:

--The DPRK is believed to use air cargo to handle high-valued and sensitive arms exports. Such cargo can be sent by direct air cargo from the DPRK to the destination country. Some modern cargo planes, for example, can fly non-stop from the DPRK to Iran, when routed directly through neighboring air space.

--A technique now being used by the DPRK to conceal its arms exports is to ship components for the assembly of arms overseas in the form of "knock-down kits" which can be delivered to foreign assembly plants, the report says. In some cases, this is a turn-key operation with the participation of DPRK scientists, technicians and specialists.

The North Korean government had no immediate response to the report.

The United Nations Security Council imposed its last sanctions on North Korea in 2009 after the country conducted a nuclear test.