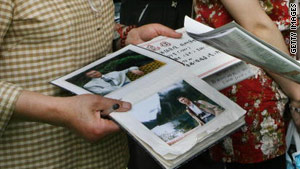 A woman shows photos of her son at a matchmaking fair in Shanghai, China, on May 20, 2006.
STORY HIGHLIGHTS
RELATED TOPICS

Beijing, China (CNN) -- Singles Day in China is the celebration -- or mourning -- of being unattached. Started by students in Nanjing in the mid-1990s, the date was selected in observation of its four solitary digits: 11/11.

While relatively obscure in most other countries, Singles Day is likely to increase in prominence as more single men in China are unable to find female partners. According to a recent study by the Chinese Academy of Social Sciences, more than 24 million Chinese men could find themselves without spouses by 2020.

Celebrating Singles Day comes in many forms across the Asian nation, and like Christmas and Valentine's Day, it has become a multi-million dollar industry.

The Fig Tree, a luxury pastry school in downtown Beijing, is offering a chocolate truffle-making course to foster "fun, flirting, measuring and mixing," among singles on Thursday.

"Baking brings people together," said Lin Zhong, school owner and pastry chef. "[We] invite the city's singles ... for an education in flirting and chocolate making."

For those with more adventurous tastes, Beijing's flagship amusement park Happy Valley is hosting a day of activities for singles, featuring games that include a singing contest entitled "Bachelor's Love Song." Another activity in store: a dedicated area in which singles can "confess their true feelings."

All of this mingling comes at a price. For every male who buys a full price ticket for $25, he may bring one female along at no cost.

Shenzhen's theme park, Splendid China, which boasts miniature replicas of many of the country's most famous landmarks, will host a vegetable hunting contest, much like an Easter egg hunt, to encourage singles to meet. The vegetables, mostly cucumbers and tomatoes, will be hidden throughout the park in a scaled-down Great Wall and bite-size Forbidden City.

In Shanghai, the city's main "marriage market" nestled in People's Park is teeming with more traffic than usual. Concerned parents of unmarried children posted personal ads and photos, boasting their education, salary levels and height and weight proportions. The advertisements line the perimeter of the park, and many anxious parents sit along the curb, hoping to meet another set of parents to make a good match.

To the west in the city of Xian, singles can reenact a famous Tang Dynasty love story or learn about the principles of love at Qujiang Cave Ruins Park, which claims to be the "first love-themed park in China."

However, in a society dominated by children who grow up without siblings (due to China's one-child policy), finding love on Singles Day is unlikely to be as easy as a walk in the park.

"For a lot of young men, they feel that what can make them more attractive to their potential dates is their good education, a good job and a lot of money ... [and] a car and apartment handy so they can attract more women," said Dr. Chang Wei, a psychologist at Beijing United Family Hospital. "That leads to a lot of young men working 10-12 hours a day with no time to socialize. Parents feel they have to step in and help them find dates, and sometimes the men are okay with that."

Not everyone desires to be matched up, though. In a survey of white-collar workers earlier this week on popular Chinese jobs site Zhaopin.com, about 70 percent of married or committed individuals said they missed being single.

Once frowned upon in China, divorce is now common, too. In 2009, more than 2.46 million couples divorced in the country, almost twice the number in 2001.

But like many singles in China, Alexandra Shi, an undergraduate student at Beijing Foreign Studies University, is looking for love. This year, she'll mark the day with her fellow single friends, and they will likely take one chopstick and make a wish to not be "a 'single stick' anymore."

"Being single is not cool...for me, being in a relationship would do me good I guess," Shi said. "But being single for now doesn't make my life miserable. Definitely don't want to celebrate next year's Singles Day though!"