Obama stops in Indonesia, could leave early due to volcanic ash 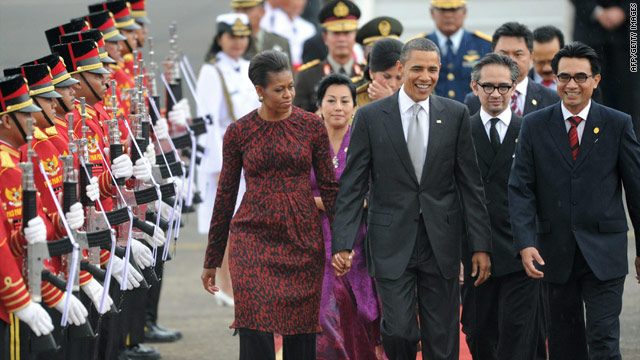 Jakarta, Indonesia (CNN) -- The Indonesia volcano that threatened President Obama's visit is now "likely" to shorten an already brief stop to the capital city of Jakarta.

Obama arrived in Indonesia, where he spent part of his childhood, on Tuesday for a two-day trip.

Obama is scheduled to meet with Indonesian President Susilo Bambang Yudhoyono and hold a news conference with him; attend an official dinner; and visit the Istiqlal Mosque, the largest mosque in southeast Asia.

Gibbs said the President still hopes to deliver a speech at the University of Indonesia.

"My sense is, our hope is that while we may have to truncate some of the morning we can get the speech in," Gibbs told reporters aboard Air Force One on a flight from New Delhi to Jakarta..

Ben Rhodes, the deputy national security adviser for strategic communications, said earlier that Obama lived in Jakarta for several years as a boy.

In the university speech, "he'll have a chance to talk about the partnership that we're building with Indonesia ... [and]also to talk about some of the themes of democracy and development and our outreach to Muslim communities around the world, while also speaking of Indonesia's pluralism and tolerance as well," Rhodes said ahead of Obama's 10-day tour of Asia.

"While [Indonesia is] a Muslim majority, it's a host to a broad religious diversity," Rhodes added.

"We don't see the differences between Obama and Bush. They both oppress Muslims. They both have blood on their hands," said Ismail Yusanto, a spokesman for the Muslim group Hizbut Tahrir.

"That's why we reject Obama and we don't believe that he's reaching out to Muslims."

About 20,000 people attended the rallies, the spokesman said.

More than one in 10 of the world's Muslims live in Indonesia, which has about 205 million Muslims.

Obama's trip to Asia started Saturday with a three-day visit to India.

His stay in India -- the third largest economy and one of the world's few growth markets -- included a meeting with Indian Prime Minister Manmohan Singh in New Delhi and an address to the nation's parliament.

Noting the country's rise as a world power, Obama said he sees the United States cooperating with India in various international and regional alliances. He praised India's role in the climate change negotiations and its role as a top contributor in U.N. peacekeeping missions.

Obama is to meet with Chinese President Hu Jintao while both are in South Korea. The U.S. president also is to deliver a speech to U.S. troops in South Korea on Thursday, which is the Veterans Day holiday in the United States.

The president's Asia tour is part of an administration focus on a vital region for expanding trade and fighting terrorism, Rhodes said ahead of the trip.