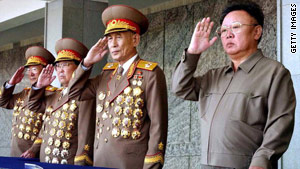 Jo Myong-Rok, second right, during the 60th anniversary of the Workers' Party of Korea in Pyongyang on October 10, 2005.
STORY HIGHLIGHTS

Jo, the vice marshal of the Korean People's Army and a loyal follower of leader Kim Jong Il, "devoted his whole life to the sacred struggle for the freedom and independence of the country and the victory of the cause of socialism," according to the Korean Central News Agency.

Jo made history in 2000 when he became the first North Korean military officer ever to enter the U.S. Pentagon. He met with then-Defense Secretary William Cohen. That same trip, Jo also met with President Bill Clinton and Secretary of State Madeleine Albright.

Jo was a veteran of the 1950-1953 Korean War, serving as a fighter pilot for the Korean People's Army, according to KCNA. He was appointed vice marshal in 1995.

An obituary issued Saturday by Pyongyang called Jo's death "a great loss to the party, the army and the people" of North Korea, KCNA reported.

A state funeral is planned for Wednesday, according to KCNA. Jo's casket will lie in state in the Central Hall of Workers beginning Monday.