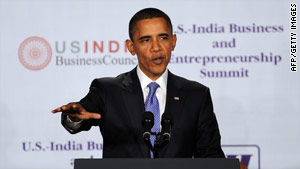 Mumbai, India (CNN) -- Eager to fend off any criticism that he's globetrotting just days after a disastrous midterm election, President Obama unveiled about $10 billion in new contracts for U.S. exports to India on Saturday as he launched an aggressive push to show his trip to Asia will deliver jobs back home.

"The United States sees Asia, and especially India, as a market of the future," Obama said at a meeting here with business leaders from the U.S. and India. "For America, this is a jobs strategy."

It is a delicate balancing act for Obama to promote broader trade relations with India, given American frustration with the outsourcing of U.S. jobs to call centers in cities like Bangalore here in India.

But Obama took the issue head-on, by asserting that the notion of Indian outsourcing being a net drain on the U.S. economy is part of a "caricature of India as a land of call centers and back offices that cost American jobs."

"But these old stereotypes, these old concerns ignore today's reality," Obama said. "In 2010, trade between our countries is not just a one-way street of American jobs and companies moving to India. It is a dynamic, two-way relationship that is creating jobs, growth, and higher living standards in both our countries."

Senate Minority Leader Mitch McConnell of Kentucky, and other Republicans back in Washington, however, immediately expressed skepticism about Obama's renewed interest in the issue after failing to move forward on pending trade deals with South Korea, Colombia and Panama.

Don Stewart, spokesman for McConnell, said the senator delivered a speech on the Senate floor the day after Obama's inauguration urging the new president to make the trade deals a top priority because "increasing markets overseas for our farmers, entrepreneurs and manufacturers through trade agreements will grow good jobs."

Stewart said at a subsequent meeting, McConnell renewed his call to move the trade agreements but "sadly, Democrats in Congress said 'no' to these agenda items."

But Stewart did add that McConnell is "encouraged" that Obama suggested Saturday that he is now moving forward on the trade deal with South Korea, another country the president is visiting later in the week.

"It's certainly welcome," Stewart said. "We know that expanding markets for American goods, services and agriculture overseas will help increase jobs here at home. And maybe the president's renewed focus will encourage Democrats in Congress to join us in this bipartisan effort."

Obama penned an op-ed in Saturday's New York Times headlined "Exporting Our Way to Stability," in which he vowed that in Seoul he would "work to complete a trade pact that could be worth tens of billions of dollars in increased exports and thousands of jobs for American workers."

Obama also reiterated his call to double U.S. exports all around the world in the next five years. "We want to be known not just for what we consume, but for what we produce," he wrote. "And the more we export abroad, the more jobs we create in America. In fact, every $1 billion we export supports more than 5,000 jobs at home."

Obama announced Saturday that about 54,000 U.S. jobs will be created by $10 billion in new contracts for the Indian government and private companies here to buy a slew of American products, including jet airplanes from Boeing as well as engines and gas turbine technology from General Electric.

James McNerney, Boeing's chairman of the board who serves on an advisory council for the president and made the trip to India, credited Obama with helping to encourage the deals that will enable his company to sell 10 C-17 military transport planes to the Indian air force as well as 30 737s to commercial airlines in India.

"Having the president here, it helps," McNerney said. "Ever since the civil nuclear deal, which really brought closer ties between India and the United States in a lot of areas, I think the follow-on impact of that has been closer military ties. For the president to state as a priority, by his presence, that closer cooperation, sharing technology across the two countries, can only help. And in this case, it has."

McNerney also addressed the issue of outsourcing by American companies, suggesting that it may have gone too far.

"Big companies like Boeing have gone through a period of making their business models very horizontal," McNerney told reporters. "I think we're all wrestling with that model. It's become overextended in some cases."

He added that he predicts there will be a lot of global cooperation "but somewhat less outsourcing. That's just my take."