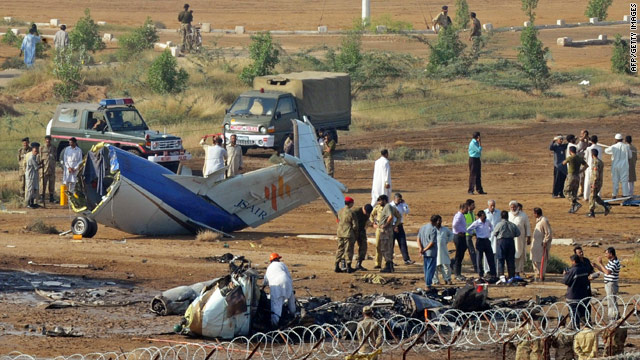 Rescue crews have so far pulled out 12 bodies from the plane's wreckage, he said.

"The bodies were burnt so badly, even we can't differentiate whether they are man or woman," he said. "All the bodies have become like coals."

The plane -- with 20 passengers and 2 crew members -- took off from Karachi's Jinnah International Airport at 7:13 a.m. Friday and was headed to the Bhit Shah oil fields in the Sindh province, said Pervaz George of the country's civil aviation authority.

It crashed a minute later, he said.

The pilot told the control tower that the plane had developed a problem in one of its engine. He was asked to turn back around.

The aircraft went down as the pilot was attempting to do so, George said.