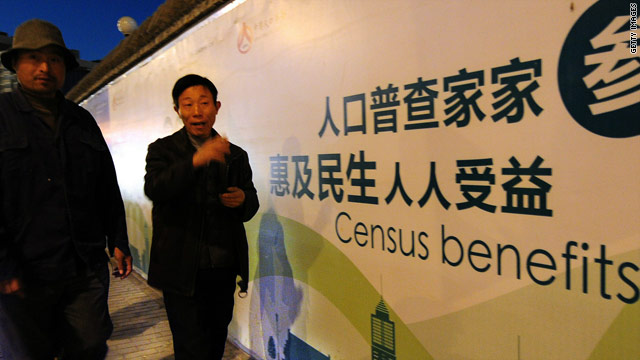 Pedestrians walk past a billboard for China's census on October 29, 2010, in Beijing, China.
STORY HIGHLIGHTS

About 6.5 million census takers are knocking on doors, often being ignored or turned away, state media says. Many people are reticent about answering government questions when their incomes are rising and some families have exceeded the country's one-child policy, China Daily said.

For the first time, China will count foreigners in its census. They have to answer only eight questions, compared with the 18 that most Chinese will face. The questions focus primarily on identity, sex, ethnic group, household registration and education.

Nonetheless, many Chinese are wary.

"It is harder to gather accurate information this time than the previous five national censuses," Xing told China Daily. "Especially in top-flight communities, not all residents are willing to reveal personal information."

Millions of Chinese have reason to worry: A large, unregistered floating population live in big cities, going undocumented to take better-paid work away from their rural villages.

Government officials want as accurate a count as possible, to better plan for development.

The census results are to be made public in April 2011.