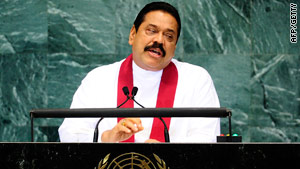 The move followed media reports that the Riyadh Supreme Court had endorsed the death sentence imposed on Rizana Nafeek for killing the 4-month-old boy in 2005.

She killed the child after she was asked to bottle-feed him, Saudi police said. Nafeek said the child died accidentally, choking on milk.

A three-judge panel of the Dawadami High Court found Nafeek guilty, and the death sentence was imposed in June 2007.

About 1.5 million Sri Lankans work abroad -- nearly 400,000 of them in Saudi Arabia alone -- because of their limited earning potential at home.

Nafeek was 17 when she started working in Saudi Arabia, and was accused of killing the baby two weeks into her job.

She took the position to support her family after they were displaced by the 2004 tsunami in the Indian Ocean.