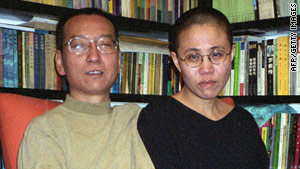 Liu Xiaobo, a leading Chinese dissident, and his wife, Liu Xia, are seen in the 2002 photograph.
STORY HIGHLIGHTS

(CNN) -- A group of Nobel laureates sent a letter Monday to the leaders of the G-20, requesting their help in calling for the release of 2010 Nobel Peace Prize winner Liu Xiaobo, a leading Chinese dissident.

Liu is serving an 11-year prison term after repeatedly calling for human rights and democratization. His wife, Liu Xia, was placed under house arrest after the Nobel Committee announced her husband as the winner earlier this month.

The letter -- signed by 15 Nobel laureates, including former U.S. President Jimmy Carter, the Dalai Lama, Holocaust survivor Elie Wiesel and Archbishop Emeritus Desmond Tutu -- urged the leaders while at next month's G-20 summit to "personally impress upon Chinese President Hu Jintao that the release of Dr. Liu would not only be welcome, but is necessary."

They also called on them to ask the Chinese government to release Liu Xia from her house arrest and "enable her to communicate freely with whomever she wishes." Since her house arrest, Liu Xia's communication with the outside world has largely been cut off, prompting protests from human rights organizations.

"The Chinese government's release of Dr. Liu would be an extraordinary recognition of the remarkable transformation China has undergone in recent decades," the signatories wrote in closing the letter.

China's state media have ratcheted up their rhetoric against the peace prize, after the foreign ministry called the choice of Liu a "blasphemy" to the prize.

China Daily, the official English-language newspaper, ran a commentary that said the Nobel decision was a Western plot to contain a rising China.

Despite official determination to erase all positive mentions of Liu from the public domain, his victory has inspired great enthusiasm among many in China, especially in the country's nascent but fast-growing civic society,

In naming Liu as the 2010 winner, the Nobel Committee stated: "Over the past decades, China has achieved economic advances to which history can hardly show any equal. The country now has the world's second largest economy; hundreds of millions of people have been lifted out of poverty. Scope for political participation has also broadened. China's new status must entail increased responsibility."