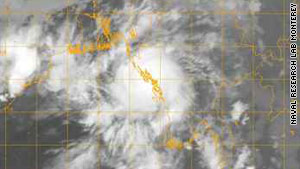 Tropical Cyclone Giri strengthened further to 155 miles per hour just before landfall near Sittwe, Myanmar, making the storm equal to a super typhoon in the Western Pacific and a borderline category 4/5 on the Saffir-Simpson scale used in the Atlantic.

It's currently stronger than Tropical Cyclone Nargis was when it made landfall in May 2008, killing more than 100,000 people in southern Myanmar, the meteorologists said.

Giri, which is currently making landfall near the city of Sittwe, strengthened from 52 to 144 miles per hour over the last 24 hours.

State-run media in Myanmar said cyclone-spawned squalls are expected and ships and trawlers are being warned.

The Irrawaddy, an opposition newspaper, said the cyclone struck land near Kyaukphyu, a large island in western Myanmar, and severed phone links.

Citing Yangon residents, the newspaper said state-controlled radio and TV broadcast constant warnings advising people to keep away from electricity poles and tall trees and to believe official reports and not rumors about the storm.