Tibetan students protest, say China is wiping out their culture 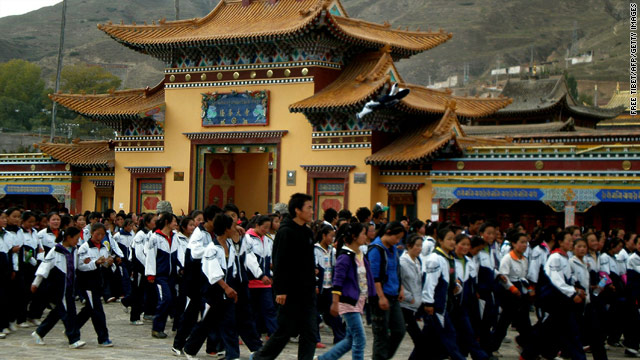 (CNN) -- Thousands or hundreds of Tibetan students have taken to the streets in protest this week, depending on divergent accounts -- one from advocates for a free Tibet and another from the ruling Chinese government.

The students say their culture is being wiped out as China overhauls curriculum and limits the use of the Tibetan language in schools.

"The protest resulted from a new education policy which reduces Tibetan language teachings," an official identified only as Mr. Wang, speaking for the International Information Office of the Qinghai government, said Thursday.

"We want equality of culture," the students chanted in Tongren county in Huangnan Autonomous Prefecture.

"The protests were sparked by Chinese educational reforms in Rebkong, which stipulate that all subjects will be taught in Chinese and that all textbooks will be in Chinese, except for Tibetan language and English classes. These reforms have already been implemented in other areas across the Tibet Autonomous Region, including in primary schools," the group Free Tibet said. "The use of Tibetan is being systematically wiped out as part of China's strategy to cement its occupation of Tibet."

Police did not interfere with the protest, but officials warned that "ringleaders" would be expelled if the demonstration continued, the activist group said.

"The new education policy is made according to relevant national regulation," Wang said. "Huangnan Prefecture held a conference after the protest happened, and formed a working team headed by a deputy director of provincial education department. The working team went to Huangnan, explained the new education policy to the students. The students ended the demonstration shortly afterward."

In a news release, the Free Tibet group quoted an unidentified former middle school teacher in Rebkong as saying: "The Chinese are enforcing reforms which remind me of the Cultural Revolution. This reform is not only a threat to our mother tongue, but is in direct violation of the Chinese constitution, which is meant to protect our rights. For Tibetans, the Chinese constitution is meaningless."

Secondary education is taught only in Mandarin and university entrance exams are in Chinese, keeping Tibetans disadvantaged and poor, Free Tibet said.

Many Tibetans want independence from China. The Dalai Lama, Tibet's spiritual leader, has said he does not advocate violence or a separate and independent Tibet. He has said he wants a genuine autonomy that preserves the cultural heritage of Tibet. The Chinese government accuses him of inciting Tibetan activists to violent protest.

Tibetans say China invaded their country in 1950. Beijing says the remote Tibetan plateau has historically been part of China.