Bringing aid to the Afghans: A deadly occupation 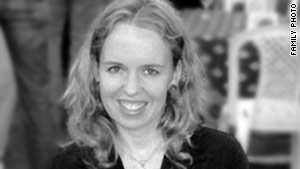 The death of Linda Norgrove shows the dangers aid workers face as they try to help the people of Afghanistan.
STORY HIGHLIGHTS

(CNN) -- On the morning of September 26, Linda Norgrove was in an unmarked Toyota Corolla traveling from Asadabad to Jalalabad in eastern Afghanistan, a spectacular route with towering mountains to the right and a broad river to the left. Spectacular but also very dangerous -- ambush country in a part of Afghanistan where many different groups, including criminal gangs, the Taliban and al Qaeda, have a presence.

Norgrove, who was British, worked for Development Alternatives Inc. (DAI), a U.S. company that handles substantial contracts for the U.S. Agency for International Development in Afghanistan. An experienced development worker who understood the risks of being in this volatile part of Afghanistan, she was wearing a burqa to better blend in and was traveling in a two-car convoy with local staff. But gunmen abducted her that day, on the very same stretch of road where two months earlier, a U.S. military convoy had been ambushed.

Thirteen days after she was led off into the steep mountains above, Norgrove was killed during a rescue attempt by U.S. Navy Seals, throwing into sharp focus again the dangers facing aid workers as they try to help the people of Afghanistan, and especially of organizations working closely with the U.S. government.

The Afghanistan NGO Safety Office (ANSO) does not believe that aid workers are being targeted by the Taliban. But its director, Nic Lee, says that violence in Afghanistan has "escalated phenomenally." In a report last week, ANSO detailed the number of attacks against Afghan and international security forces, as well civilians, by "armed opposition groups" this year, saying that they rose from 523 in February alone to a record high of 1,483 incidents in September. ANSO says September's high was largely due to parliamentary elections, but it sees a consistent pattern over the past five years, with attacks rising 45 to 55 percent year on year. That volatile environment makes for more security headaches for NGOs.

One consequence is that expatriate workers travel beyond the capital less and less. Brian Cavanagh, Afghanistan director of the U.S.-based NGO CARE International, says "the areas considered safe have dwindled" and CARE has introduced more restrictions on the movement of its international staff. For example, they can no longer travel by road from Kabul to Paktia, just 60 miles to the south. CARE has no marked vehicles in Afghanistan.

Bob Kitchen, country director for the International Rescue Committee (IRC), says his foreign staff have not been able to visit the IRC's projects in Logar and Khost provinces in the south for about two years. "Working to assure high standards of quality within our programming is an increasing challenge that demands daily attention," he told CNN.

The IRC, like many other NGOs, relies on dedicated local staff to keep programs running in dangerous areas. They take extraordinary precautions, often traveling on public transport and never in marked vehicles, not carrying identification linking them with an aid agency, even scrubbing their mobile phones of numbers that would link them to an international organization.

Nor are IRC employees allowed to interact with the provincial reconstruction teams that work on aid projects under military protection. "It's so dangerous to be associated with them, because they are part of what the insurgents see as the occupying force," he said.

Cavanagh agrees. He says that his organization "completely avoids" the reconstruction teams. Besides the risks of association with the military, he says that reconstruction team projects are driven by the need to hit targets and deadlines, and can't take into account changing local circumstances.

Having any kind of armed protection would make it very dangerous for our staff.
--Michiel Hofman, Afghanistan director of Doctors Without Borders
RELATED TOPICS

Many traditional NGOs are also scrupulous about being -- and being seen as -- independent from the military or the Afghan government. "Organizations that implement programs on behalf of the government, or the international military forces, will risk being targeted," says Michiel Hofman, Afghanistan director of Doctors Without Borders.

"Having any kind of armed protection would make it very dangerous for our staff," he said. "Our safety depends on the agreement with all warring parties that we are not linked to any military group, and having armed guards would violate that agreement."

However, Doctors Without Borders is increasing its international staff in Afghanistan "as they can provide a measure of protection to national staff who otherwise could be pressured to divert or provide [our] resources to one party or another," Hofman says.

USAID and other government organizations still depend on contractors and subcontractors to deliver aid projects, and they in turn rely on the likes of Linda Norgrove. The stark choice for such workers, who are outside the military's orbit, is to travel and work as locals and try to blend in, or employ security and stand out as a target.

Earlier this year, Norgrove's program director, Jonathan Greenham, spoke of the importance of being "outside the wire" in an interview with the Philadelphia Inquirer. "My team can go places and do things soldiers can't," he said at his office in Jalalabad. They kept a low profile and could move freely "because the communities invite them in and support them. Sitting within the wire, you know nothing of what is going on outside," he told the newspaper. "You have to sit in a village and talk and build relationships."

That has become much more difficult. Jim Boomgard, the CEO of DAI, speaks of "new realities" in eastern Afghanistan in the past 18 months as security has worsened. And groups like his that contract for USAID say they have another problem: They must provide detailed accounts of the money they spend. Washington-based DAI has some 45 foreign employees living outside the capital, many of them to help keep track of where the money goes, as well as some 700 local staff scattered throughout the country. Earlier this year, its offices in Kunduz were attacked; a British, German and two Afghan nationals were killed.

Boomgard told CNN that "balancing security risks, development and compliance requirement is a constant struggle." DAI is "spending time accounting to the government for every last dollar spent -- time that could be spent achieving the best possible impact," he says.

It has to. Earlier this year, DAI fired several Afghan employees in its Jalalabad office who were allegedly taking kickbacks from local contractors and introduced tougher financial oversight -- not an easy task in an economy largely reliant on cash transactions. The problems were referenced last month in a report by the USAID inspector general, which said there were indications of "pervasive fraud" in DAI's Jalalabad operation.

One leading NGO representative in Kabul says contractors like DAI are more vulnerable "as they implement USAID counter-insurgency projects. So by definition, they are in the military orbit, and opposition groups are aware of this."

One option for some NGOs -- but not for those with U.S. government contracts -- is to engage with the Taliban, a tactic encouraged by the Afghanistan NGO Safety Office. In its latest report, it says that as insurgents "are certain to play a permanent and increasingly political role... we recommend that NGOs start developing strategies for engaging with them rather than avoiding them."

Kitchen agrees. Recently, several local employees of the IRC were stopped by the Taliban on a road in southeastern Afghanistan. But they were released with apologies once it was clear their project was supported by the local community. "The Taliban are nuancing their approach," Kitchen says.