Death toll rises in latest round of flooding in Vietnam 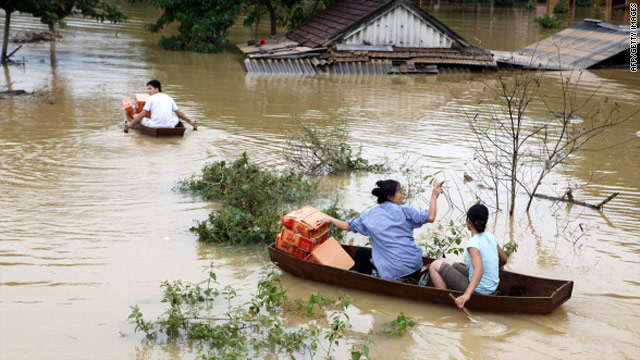 Villagers make their way home on 18 October on small boats with boxes of instant noodles received from a relief aid team at a flooded village in Huong Khe district, central province of Ha Tinh.
STORY HIGHLIGHTS

Seven died in Ha Tinh province after Sunday's rainfall reached more that 800 millimeters (31.5 inches), according to VietNamNet. The province accounted for more than half the homes reported flooded.

One person has been reported missing in this week's floods.

Throughout the region, people and cattle could be seen sitting on roofs, while boats floated through what would otherwise have been the nation's streets. About 1 meter of water lay over some parts of a Highway 1A, a north-south connection through Vietnam, and service on the north-south railway through the southeastern Asian nation was suspended, reported state-run Vietnam News.

The Vietnamese government is distributing 2,000 tons of rice and $10 million worth of aid to the worst-hit areas, in Ha Trinh and Quang Binh provinces, reports said.

Record-setting rains a few weeks earlier in central Vietnam spurred severe flooding that killed 66 people and inundated more than 10,000 dwellings. Hundreds of Vietnamese troops were dispatched to the region in the first week of October to help with rescue operations and help residents and business owners deal with millions of dollars of damage.