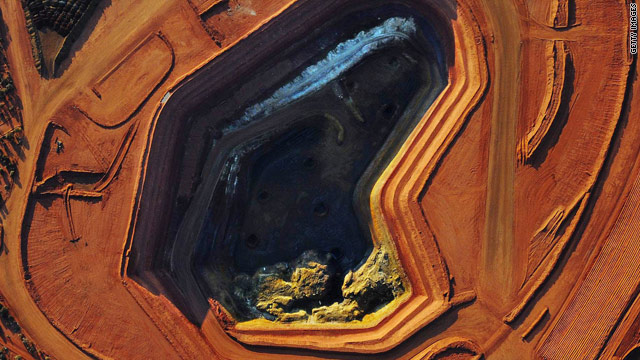 This undated handout aerial photo released by the Lynas Corporation on October 1, 2010 shows the stockpiles of rare earth ore at their Mount Weld mine in Western Australia.
STORY HIGHLIGHTS

China is the world's largest producer of rare earth minerals, which are crucial to making certain automotive and electronic products.

"We've seen the news report and are seeking more information in keeping with our recent announcement of an investigation into whether China's actions and policies are consistent with WTO rules," said U.S. Trade Representative spokeswoman Nefeterius Akeli.

Citing three unnamed industry officials, the New York Times reported Chinese customs officials began imposing shipment restrictions Monday morning. It was not immediately clear whether all shipments were stopped, or whether some were being allowed through, the newspaper reported.

The move, if true, would strain the already stressed trade relationship between the United States and China.

U.S. trade officials recently said they would launch an investigation into whether China subsidizes and protects its clean energy producers in violation of World Trade Organization rules.

"We strongly support USTR's investigation into whether China is blocking exports of critical minerals to the U.S.," said Rep. Sander Levin, D-Michigan. He is also the chairman of the House Ways and Means Committee.

"If China is found to be blocking shipments of these critical minerals in retaliation to the U.S. investigation ... of Chinese practices regarding green technology, then China's blockade would require the U.S. to immediately challenge these actions as WTO inconsistent," he added.

The New York Times also reported that China has been blocking shipments of rare earth minerals to Japan for the last month.