South Korea to deploy largest force ever for G-20 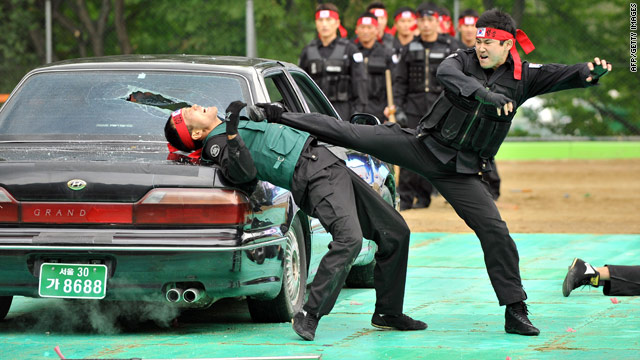 (CNN) -- South Korea will mobilize its largest security force ever in anticipation of widespread protests during the G-20 summit next month in Seoul, the Yonhap news agency said.

Authorities said a total of 50,000 police and riot police will be deployed during the summit on November 11 and 12, according to Yonhap.

Preparing for the country's largest event yet, authorities have banned demonstrations from November 8-12 within 2 kilometers (1.2 miles) of the summit site.

A special law went into effect this month, allowing Korean police wider authority to restrict demonstrations and to mobilize the military to do likewise, Yonhap said.

Dozens of union and civic groups have joined to oppose G-20 efforts, such as globalizing financial systems, the Korean Confederation of Trade Unions has announced. Businesses have maximized profits while eroding workers' job security and labor rights, said the trade union, which aims to highlight such issues.

Unrelated protests also are expected by disparate groups that oppose development in a slum area of Seoul; want compensation for war victims; or demand the resignation of the chief of a state agency for the disabled, Yonhap said.

Groups need police permission before they may rally.

The G-20 held its last summit in June in Toronto, Canada.

Hundreds of protesters were arrested as violence and vandalism broke out. Cars were set on fire, windows were broken and graffiti was sprayed.

Some protesters were tear gassed, though no serious injuries were reported.

Collectively, the Group of 20 accounts for about 85 percent of global economic output. The 1997 Asian financial crisis prompted creation of the group, which aims to stabilize the world financial market.

The G-20 includes industrialized nations and developing economies, which focus on economic issues and economic policy coordination. The Group of Eight continues to focus on issues such as global security.