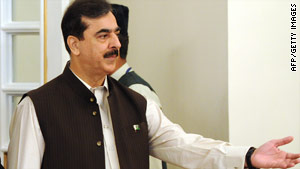 Islamabad, Pakistan (CNN) -- Several people have been seized in a plot to kill Pakistan's prime minister, and the suspects claim they were getting orders from a militant in the country's volatile tribal region, police said.

Shabir Anwar, Gilani's press secretary, had no comment on the alleged plot because it is a security matter.

The plot to strike the compound, located in the Punjab provincial city of Multan, was in its "final planning stages," Qureshi said. The location is about 395 kilometers, or 245 miles, southeast of the nation's capital, Islamabad.

The suspects were planning to use a car bomb for the attack, and that they had acquired large amounts of fertilizer to manufacture an improvised explosive device, since confiscated by police, he said.

A vehicle for the attack had not been acquired yet.

The police confiscated one kilogram of gold and and two and a half kilograms of silver, which the men were going to sell to fund the plot, the official said.

Qureshi said the suspects have confessed that they were getting their orders and instructions from Kari Imram, a leader of a Taliban offshoot group from Miran Shah in North Waziristan. Drone strikes said to be conducted by the United States have targeted militants in North Waziristan, one of seven of the county's tribal districts.

The arrests were made after police stopped three suspects traveling on two motorcycles near Multan in the town of Ahmed Pur Sharkia on a check during a police patrol. Questioning led police to other suspects.