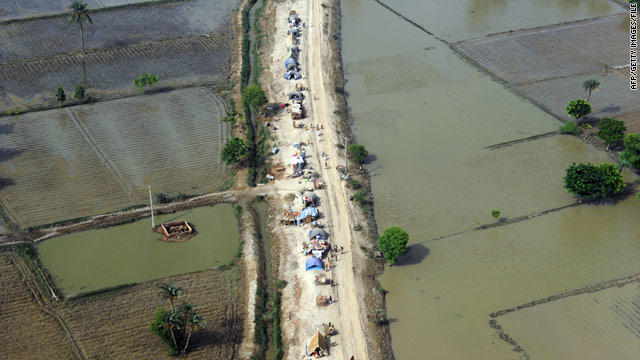 (CNN) -- The floods that ravaged Pakistan this summer caused an estimated $9.7 billion in damage to homes, roads, farms and other parts of the southwestern Asian country, the World Bank and Asian Development Bank announced Thursday.

The determination, made after a survey examining damage in 15 key sectors across the country, is more than twice the cost of 2005's 7.6-magnitude earthquake that killed an estimated 86,000 people in northern Pakistan, the World Bank said. Agriculture and livestock were particularly hard hit, while the flooding also destroyed a large number of houses and damaged roads and irrigation facilities.

"Our job as friends of Pakistan is to help the country respond to this enormous reconstruction challenge," said Rachid Benmessaoud, the World Bank country director for Pakistan.

The flooding began in early August, and floodwaters continued to rage in the countryside more than seven weeks later. More than 1,700 people died due to the flooding, according to Pakistani authorities, while more than 20 million were displaced. Many of those suffered from various medical maladies, including at least 700,000 cases of acute diarrhea, 800,000 acute respiratory infections, nearly a million cases of skin disease and almost 183,000 suspected malaria cases, the United Nations reported.

Speaking at a meeting Thursday in Brussels, Belgium, with European Union and NATO officials, U.S. Secretary of State Hillary Clinton said that Pakistan must implement economic reforms to ensure victims of the catastrophic flooding receive support and that wealthy Pakistanis should be doing their part.

"The most important step that Pakistan can take is to pass meaningful reforms that will expand its tax base," Clinton said. "The government must require that the economically affluent and elite in Pakistan support the government and people of Pakistan."

She added, "It is absolutely unacceptable for those with means in Pakistan not to be doing their fair share to help their own people while the taxpayers in Europe, the United States and other contributing countries are all chipping in to do our part."

In mid-September, U.N. Secretary-General Ban Ki-moon called the floods, which were worst in the southern Sindh province but affected about one-fifth of Pakistan, "the worst natural disaster the United Nations has responded to in its 65-year history."

At that point, Ban announced that the world body was seeking more than $2 billion for post-flood relief and recovery efforts after receiving about 70 percent of the $460 million it initially requested.

Actress and humanitarian Angelina Jolie told CNN around that time that disaster fatigue may have been one reason the world's attention wasn't wholly focused on Pakistan.