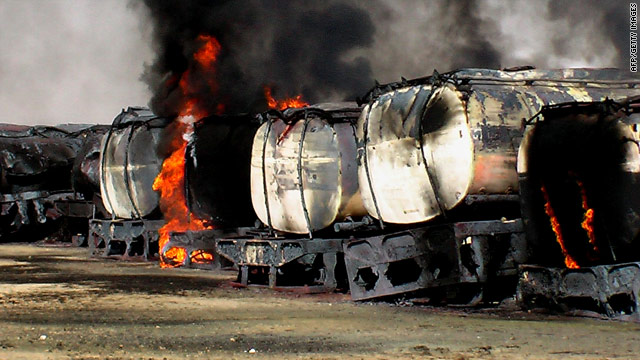 Unknown assailants attacked 28 vehicles with a machine gun and rockets, said Meeran Bukhsh, a police official in the Bolan district.

The attack is the latest in a series of strikes against vehicles in Pakistan carrying fuel for NATO forces in Afghanistan. The convoys are generally operated by contracted Pakistani firms, using Pakistani trucks and drivers.

At least six attacks have been carried out since October 1, leaving at least seven people dead.

The Pakistani Taliban has claimed responsibility for several of the attacks, including one on Wednesday that damaged 54 oil tankers.

Ihsan Ullah Ihsan, a spokesman for the Pakistani Taliban, said Wednesday's attack was carried out by a special squad created especially to attack American assets in Pakistan as a response to the increase in suspected U.S. drone strikes.

"We are satisfied by the performance of our special squad," Ihsan said this week.