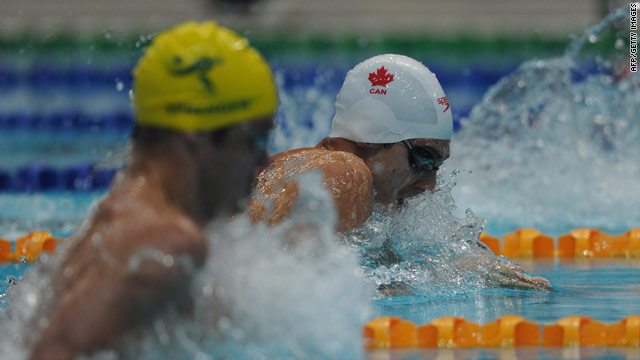 The swimmers are reporting a higher percentage of diarrhea than other athletes at the games, said an Australian official who spoke on condition of anonymity. Two Australian swimmers have withdrawn.

"The Commonwealth Games Federation chief, Mike Fennell, asked at a press conference Thursday that immediate tests be conducted on all pools. The organizing committee conducted the tests and have come back and said the water quality in all pools is clear," said an official with the Commonwealth Games Federation, who also spoke on condition of anonymity.

When asked whether there was a problem with the food, he said: "We are confident the food in the games village is up to international standards. Since September 12, more than 700 tests have been conducted on the food and all independent tests have passed with flying colors."

The federation is exploring what else could have sickened the athletes.

The illnesses threaten to further mar the games, which have been widely criticized. Organizers scrambled to pull together the event after a pedestrian bridge at a stadium collapsed last month and officials called accommodations at the athletes' village uninhabitable and filthy.

It's the first time India has hosted the international sporting event between countries of the former British Empire. The games, held every four years, include many Olympic events and other sports traditionally played in those countries.

The games gave India an opportunity to promote a shiny image as an emerging power. The government spent billions on a new international airport, additional metro lines and fresh landscaping along dingy Delhi roads.

Problems piled up before the games, however. Last month, gunmen fired on a tourist bus in New Delhi and injured two Taiwanese tourists. A car blaze turned out to be a crudely manufactured bomb. And a militant group warned that it planned to target the games.

Indian law enforcement authorities responded with a heightened security plan, placing thousands of extra forces on the streets of the capital.

Two world-class athletes canceled their trips, citing security and health concerns. Entire teams threatened to do the same, while others delayed their arrival date.

Elena Baltacha, a tennis player picked to represent Scotland at the games, pulled out.

"I am incredibly disappointed, because I was really excited about playing for Scotland, but conditions in Delhi are such that going there would pose too high a risk to my health," she said at the time.

India remains a developing country with millions of poor people, and risks such as dengue fever.

On Monday, doctors confirmed a case of dengue fever in an official with the Indian lawn bowls team at the Commonwealth Games.

The 30-year-old man could have contracted the disease from outside the athletes' village in New Delhi. He had complained of feeling sick a day after arriving at the athletes village last month, said a spokesman for the G.B. Pant Hospital in the city.

Dengue is the most common virus transmitted by mosquitoes in the world. It causes as many as 100 million infections and kills 25,000 people every year. Dengue is found in tropical and sub-tropical climates worldwide, mostly in urban and semi-urban areas, according to the World Health Organization.