Another strike on NATO convoy in Pakistan; vehicles set ablaze 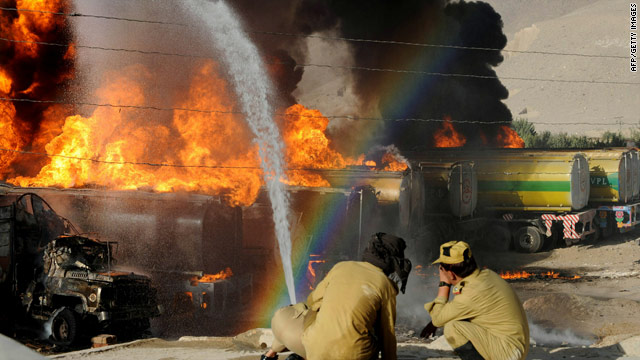 This convoy was parked on side of the road, and convoys are generally operated by contracting Pakistani logistics firms, using local trucks and drivers.

This is the latest strike on Afghan-bound supply convoys in Pakistan. Azam Tariq, the central spokesman for Pakistani Taliban, said a special squad designated to strike NATO supply efforts made the attack near Quetta, Pakistan.

The Pakistani Taliban has claimed responsibility for an earlier attack on oil tankers, a spokesman for the militant group told CNN by phone Wednesday.

Quetta police said 20 oil tankers parked near that city were set ablaze Wednesday, and one person died in the attack.

Shah Nawaz, a senior Quetta police official, said more than 12 gunmen in three vehicles opened fire on the tanker trucks. He said the person who died was killed in the shooting.

Nawaz said the gunmen also threw petrol bombs on the trucks. Of the 20 tankers that caught fire, nine were destroyed.

At least five other attacks have been carried out on vehicles carrying supplies for NATO forces in the past week, leaving at least six people dead.

The Pakistani Taliban has also claimed responsibility for two of the earlier attacks on convoys.

"The oil and the machinery is for logistic support to the NATO forces who killed our innocent sisters and brothers in Afghanistan, which we would never allow," Tariq said Wednesday.

Pakistan closed the main land route for NATO supplies crossing from Pakistan to Afghanistan -- known as the Torkham border -- after U.S. helicopter strikes across the border killed two Pakistani soldiers.

A report from a NATO and Pakistan assessment team concluded that soldiers fired warning shots to let them know of their presence, but the helicopter crews assumed they were insurgents and fired the shots.

"Two coalition helicopters passed into Pakistan airspace several times. Subsequently, the helicopters fired on a building later identified as a Pakistan border outpost, in response to shots fired from the post. The assessment team considered it most probable that they had fired in an attempt to warn the helicopters of their presence. Unfortunately, following the engagement, it was discovered that the dead and wounded were members of the Pakistan Frontier Scouts," NATO's International Security Assistance Force said.

A second supply route through Chaman -- in the western province of Balochistan -- is open, but the Pakistani Taliban is threatening violence on any route used for NATO purposes.

"Our special squad will make [the] supply line to NATO through Chaman border as impossible as we did in Torkham border," Tariq said Wednesday.

"After closing of the Torkham border for NATO supplies, pressure on the Chaman border has become almost doubled, which is creating security problems for us," he said.

Tariq said this week that the earlier Pakistani Taliban attacks were carried out as revenge for drone strikes and NATO's attacks in Pakistan.

"U.S. and NATO forces are killing innocent Pakistanis, which is unacceptable, and we will teach them a lesson by such attacks," Tariq said.

Supply convoys are important for the Afghan war effort. Coalition forces rely heavily on convoys from Pakistan to bring in supplies and gear.

CNN's Fred Pleitgen and Charley Keyes contributed to this report.