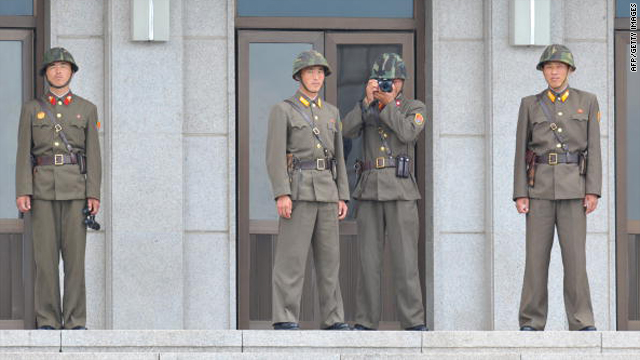 A North Korean soldier takes picture of the southern side of the cross-border village of Panmunjeom on July 27.
STORY HIGHLIGHTS
RELATED TOPICS

(CNN) -- South Korea and North Korea on Thursday will hold military talks for the first time in nearly two years, according to the South's defense ministry, the Yonhap news agency reported.

The working-level military talks are to begin Thursday morning at the truce village of Panmunjom on the Korean border.

Deadly naval clashes between North and South took place along the Northern Limit Line in 1999, 2002 and 2009.

North Korea also wants to discuss a South Korean plan to fly anti-Pyongyang leaflets into the North, in response to the sinking of a South Korean warship in March. South Korea has since deferred the leaflet plan.

The communist North's proposal was met with skepticism. Military officials in South Korea say the North tends to act provocatively, then follow with proposals to talk and try to win concessions, Yonhap said.

Seoul blames the North in the sinking of the warship Cheonan in March, which killed 46 sailors. North Korea has denied sinking the ship.

The two Koreas are technically still at war, because the 1950-53 Korean War ended without a peace treaty. North-South relations remain tense.

The Korean War divided millions of families. About 10,000 people applied to take part in a similar reunion last year, but fewer than 200 families were allowed to participate.