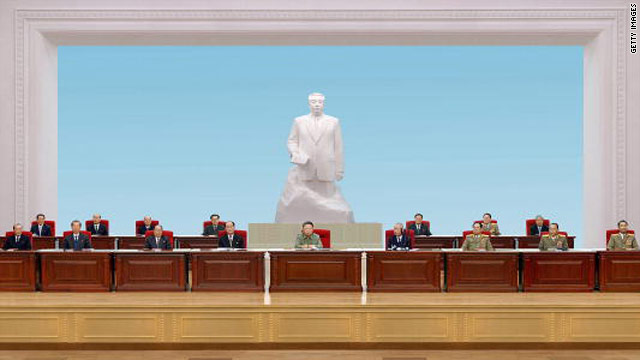 The meeting, which started Tuesday, signaled a transferring of power to the next generation.

Just before it began, North Korean leader Kim Jong Il on Monday promoted his youngest son to the rank of four-star general.

The Workers' Party of Korea last convened its delegates more than four decades ago.

Kim Yong Nam -- who has been the de facto leader of North Korea since the mid-1990s and is No. 2 to Kim Jong Il -- delivered the opening and closing speeches at the party meeting.

The party's No. 2 extolled the "Dear Leader's" virtues as he renominated him as general secretary of the ruling party.

"The half a century-long history of Kim Jong Il's revolutionary activities was a history of heroic struggles in which he blazed the path with his ceaseless thinking and pursuit and extraordinary energy and a history of victories in which he made gigantic creation and innovations with his iron will and pluck," the party's No. 2 man said, according to state-run Korean Central News Agency.

Kim Jong Il was re-elected as general secretary. That came as no surprise, given his grip on the North.

Meanwhile, little is known about his son.

"They don't release the information, so no one can know," said Kang Cheol-hwan, a North Korea defector and activist.

"When he was little, he studied in Bern (Switzerland) in a school for the elite. He got an international education."

Before Kim's promotion to general on Monday, North Korea's state-run media didn't mention him -- there were no family photos showing him as a youngster and no images of him by his father's side, learning to lead.

His grandfather, Kim Il Sung, ruled for nearly 50 years, and a mythic cult of personality was woven around him. His son, Kim Jong Il, took over after Kim Il Sung died of a heart attack in 1994.

Kim Jong Il served a 20-year apprenticeship at his father's side. But with Kim Jong Il, now 68, and in poor health after suffering a stroke, analysts think succession plans have accelerated.

In January 2009, South Korean intelligence reportedly intercepted a message circulated around North Korean embassies globally, stating that Kim Jong Un was being prepared for succession. Since then, there has been no further confirmation from any North Korean official source.

Recent foreign visitors to Pyongyang, however, say ordinary North Koreans know his name. Schoolchildren are being taught a song called "Footsteps," praising Kim Jong Un, though not by name.

Opinion: Political change in the wind

"North Korea is not a country where Kim Il Sung to Kim Jong Il or from Kim Jong Il to Kim Jong Un pass power from one person to another person. The succession goes from one power collective to another collective," said Lee Woo-young, a professor at the University of North Korean Studies in Seoul, South Korea. "I see little possibility for clash domestically between different groups."

One key question if Kim Jong Un does inherit leadership: Can he sustain his grandfather's and father's legacy, even as North Koreans go hungry while the country pours money into its nuclear program and military?

Kim Jong Il prioritized the military and bypassed the party. He might now be preparing a more dovish course, given the catastrophic economic conditions his country faces after a decade and a half of military confrontation, said Suh Jae-jean, president of Seoul's Korea Institute of National Unification.

Kim Jong Il introduced his "Red Banner" policy in 1996, a more militant tack than his father's blend of Stalinism and Korean self-reliance.

North Korea has acknowledged producing roughly 40 kilograms of enriched plutonium -- enough for about seven nuclear bombs, according to the U.S. State Department.