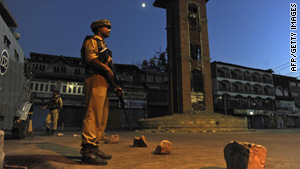 New Delhi, India (CNN) -- The Indian government said Saturday it is considering scaling down security forces in the troubled Himalayan region of Kashmir and will advise state officials there to immediately release those who have been arrested in violent anti-India protests over the last few months.

The government also plans to compensate the families of protest victims the equivalent of about $11,000 each. Since the latest wave of unrest began in June, 105 people have died. The Indian government says another 245 people were detained.

The government will also urge the immediate reopening of schools and colleges to make sure students, who have missed classes, will be prepared for annual state board exams.

The concessions were part of an eight-part plan presented by Home Minister P. Chidambaram that is intended to defuse tensions in the Muslim majority Kashmir Valley, part of India's northern Jammu and Kashmir state.

The Indian government imposed strict round-the-clock curfew in the summer capital of Srinagar and in several other areas in an attempt to prevent angry mobs from taking to the street.

Still, residents, many of whom favor an independent Kashmiri nation, came out hurling stones at police and paramilitary troopers who have in turn, opened fire and used tear gas.

Earlier this week, Chidambaram led an all-party delegation of Indian parliamentarians to Srinagar to assess the situation firsthand.

The delegation members drove through the curfew-bound streets to an international conference center on the banks of Dal Lake, once one of India's most popular tourist destinations.

The delegation met the leaders of the various pro-India parties. Kashmiri separatist leaders had turned down invitations for talks.

Hardline separatist leader Syed Ali Shah Geelani, who has been spearheading the agitation in Kashmir, rejected the invitation on the grounds the delegation wanted to treat Kashmir as an internal Indian problem while Geelani wants "that New Delhi should accept Kashmir as international dispute."

More moderate leaders Mirwaiz Moulvi Umar Farooq and Yasin Malik also turned down invitations, but sent a joint memorandum to the delegation reiterating their demands for restoration of normalcy and the initiation of dialogue.

Among those demands were demilitarization, the release of detainees and the withdrawal of they called draconian laws.

Claims on the mostly Muslim Kashmir Valley has been a matter of dispute since the independence of India and Pakistan in 1947.

India deployed thousands of troops in Kashmir to guard against what Indian leaders believe was a Pakistan-backed insurgency that began in late 1980s. That insurgency, which claimed tens of thousands of lives, has waned but the troops have remained, fueling new waves of separatist unrest.

Omar Abdullah, the chief minister of Jammu and Kashmir state, called the government's gestures a positive development that must lead to a resolution of political issues, state media reported.