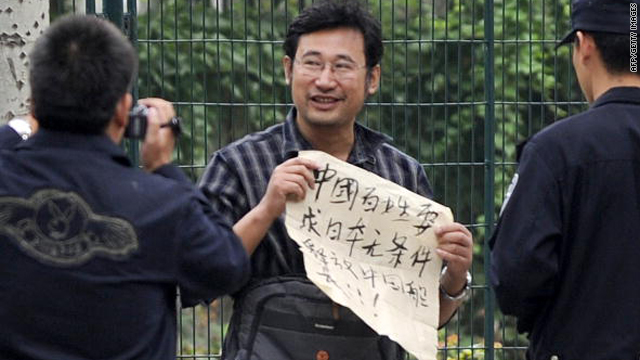 Tokyo, Japan (CNN) -- The detained captain of a Chinese trawler was released by Japan and returned to his home country, the state-run Xinhua news agency reported, citing the Chinese Foreign Ministry.

Zhan Qixiong, who had been held by Japanese authorities since September 8, arrived safely early Saturday morning in Fuzhou, the capital of southeast China's Fujian Province, according to Xinhua.

The captain left Japan with officials from China's Foreign and Agriculture ministries.

"We decided to suspend the charges in consideration of the Japan-China relationship," said the Japanese prosecutor in the case.

In China, the captain's wife, Chen Tingting, said she was thrilled.

"We are so happy, we are just really very happy to hear the news," she said. His home is Jinjiang city, in Fujian.

The captain was arrested off the disputed Diaoyu Islands, in the East China Sea, after his vessel crashed into two Japanese patrol boats. He was accused of obstructing Japanese public officers while they performed their duties.

"The Japanese side bears full responsibility for the current situation, and it shall bear all the consequences that arise," Chinese Premier Wen Jiabao said Tuesday in New York, as China escalated demands for the captain's release. Wen was in New York for the U.N. General Assembly.

Word of his release quickly followed the arrest of four Japanese nationals in China. The four are being investigated for entering a military zone without authorization and videotaping military targets, Chinese state media said.

Neither country linked the captain's case with the arrest of the four Japanese nationals, however.

The four Japanese nationals were sent to China for a Japanese government project to reclaim World War II chemical weapons left by Japan's Imperial Army, their company said Friday. A Chinese national also is missing and presumed arrested with his Japanese co-workers on Wednesday in northern Hebei Province.

But Beijing had plenty to say about Japan detaining the Chinese fishing captain. Japan "illegally arrested" him and his crew of 14, China said.

Beijing says the Diaoyu Islands and most of the South China Sea belong to China, disputing neighboring countries' claims. In Japan, the islands are known as the Senkaku. The clash over territorial waters and islands -- and the natural resources that go with them -- is a flash point in the Asia-Pacific region.

China's Foreign Ministry said that Japan had "seriously damaged Sino-Japan bilateral relations" with the arrest of the captain and his crew.

In response, China halted talks with Japan about increasing civil flights and expanding aviation rights between the two countries. Officials and nationals on both sides also canceled trips to each other's nations.