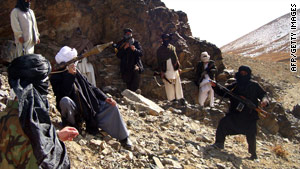 According to the official the paramilitary force is targeting Taliban fighters such as these, pictured earlier this year.
STORY HIGHLIGHTS
RELATED TOPICS

The official described the force as "well-trained" and "effective."

"You're talking about one of the finest Afghan fighting forces, which has made major contributions to security and stability," the official said.

The official spoke on condition of anonymity because of the sensitive nature of the topic.

The Counterterrorism Pursuit Teams were first revealed in a new book by Bob Woodward, associate editor at the Washington Post. "Obama's Wars," which lays out deep divisions in the Obama administration over Afghanistan strategy, will be released Monday.

According to that book, by the end of a 2009 strategy review, Obama concluded that the task in Afghanistan could not succeed without wiping out al Qaeda and Afghan Taliban havens operating with impunity in the border tribal areas of Pakistan, the Washington Post reported Wednesday.

"We need to make clear to people that the cancer is in Pakistan," Obama is quoted as saying in Woodward's book, the Post said.

A CIA spokesman would not comment on the paramilitary force.

The counterterrorism teams were first formed around 2002 and operated only within Afghanistan, current and former U.S. officials told CNN. According to a former senior intelligence official, the idea was "to find people who would blend into the Afghan society to do a lot of the clandestine work" in that country.

There is some coordination between the CIA's paramilitary force and U.S. military forces, according to a senior defense official. The official said some level of coordination is necessary, so that friendly forces know when and where each unit is operating.

"We are constantly in contact with our allies in both Pakistan and Afghanistan, as well as our U.S. inter-agency partners," the official said.

The border region is key for anti-terrorism efforts and the U.S. military has been working with both Pakistan and Afghanistan as part of a crackdown against militants along the border, with U.S. troops operating on the Afghanistan side, the defense official said.

"We still believe that ground zero for al Qaeda's operations and planning is the border area between Afghanistan and Pakistan," the defense official said.

As the border area in Pakistan became more of a safe haven for al Qaeda, the Taliban and other extremists, the counterterrorism teams' mission expanded into Pakistan. The former intelligence official said the border is a tribal area where people on both sides easily move back and forth.

"Afghans can cross the border in ways Americans cannot," said the official.

A former U.S. counterterrorism official said a team would enter Pakistan to gather intelligence and to provide targeting information to help the CIA take out suspected terrorists with missiles from unmanned aircraft.

This official said only a very few senior Pakistani leaders were aware of the teams and wondered what the fallout might be within Pakistan, suggesting the CIA's Afghan army could be "at tremendous risk" if it continues to operate in Pakistan.

"Pakistan will be on the lookout for them now," said the former official.

But Pakistani officials refuted the claims that CIA-controlled forces are operating within Pakistan.

"Pakistan will never allow boots on its soil," Foreign Ministry spokesman Abdul Basit said, referring to foreign troops. "This is one of our red lines."

A senior Pakistani military official added that there are 954 checkpoints along the border that are manned by Pakistani security forces. He said it would be "next to impossible for a group of people to enter Pakistan to chase al Qaeda and Taliban militants."

The official did not want to be identified because he is not authorized to speak to the media.

Al Qaeda in Pakistan remains a lethal enemy for the United States, a counterterrorism official said this week.

But with the help of allies, the United States has been able to score "lots of successes" against the group, said the official, who also requested anonymity.

That includes the success of U.S. unmanned predator strikes in Pakistani regions along the border with Afghanistan. Since the Obama administration took office at the beginning of 2009, missile attacks on suspected terrorists in Pakistan have increased dramatically.

The United States has "cut into their ability to plot, plan and train, but they remain very dangerous, and they are still the hub to all spokes, the heart of al Qaeda," the U.S. official said.

"No one's even close to saying it's over in Pakistan. Not at all. In fact, we not only have to keep up the pressure there, we have to spread it to al Qaeda's nodes and affiliates elsewhere."