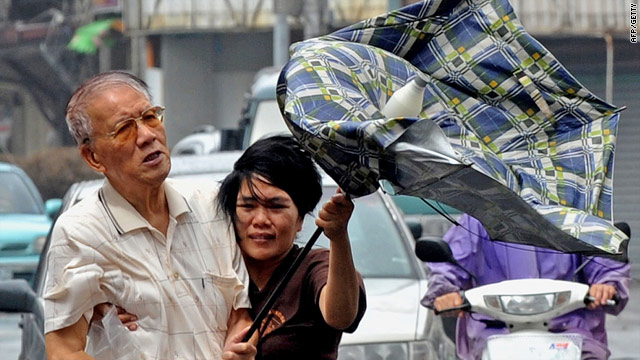 The storm had sustained winds of 120 mph (194 kph) just before it made landfall, the Central Weather Bureau of Taiwan said.

Rain amounts have been reported close to 6.6 feet (2 meters) since the storm began to move on shore late Saturday night.

Portions of Taiwan will continue to see large amounts of rain totaling 200-400mm (8-16 inches) with isolated maximums of 500mm (19 inches) in southern Taiwan.

The storm was moving westward at 20 kph and was expected to hit China on Monday morning or afternoon between Guangdong and Fujian provinces, the China Meteorological Administration reported. The agency urged local authorities to prepare for what is the strongest typhoon to hit China this year, Xinhua reported.

On Saturday, a 76-year-old woman who was trying to harvest her crops ahead of the typhoon apparently fell from a terraced hill into a river in the county, state media said. She was found drowned.

Two junior high students in the county also died Saturday, CNA said. They were among a group of seven students who were visiting a flooded canal when a girl slipped off the bank in the rain, CNA said, citing police.

Three boys jumped into the water to rescue her. Only two of the would-be rescuers made it to safety; one of the boys died, along with the girl, CNA said.

Taiwan saw vegetable prices drop Sunday by 15 percent because of a surge in supply due to farmers rushing to harvest their crops before the typhoon hit, CNA reported, citing the Taipei Agricultural Products Marketing Corp.

China considers Taiwan a breakaway province and does not recognize it as a sovereign nation.